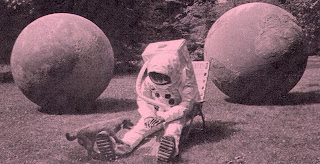 I recently talked with Bob Priest about the upcoming concert of new music that his Free Marz String Trio will be performing this Friday at 8 pm at the Community Music Center. The music is built upon several interlocking themes - centered on birthdays, zodiac signs, and other constellations of the mind. Priest, I think, is a fellow who can push free association to the limits. Well, in this case, the outer limits.

This concert features music by John Paul, Benjamin Britten, Thomas Daniel Schlee, Iannis Xenakis, Karlheinz Stockhausen, Igor Stravinsky, Darol Anger, Bob Priest, and Jimi Hendrix. The Free Marz String Trio consists of violinist Ines Voglar, violist Joel Belgique, and cellist Adam Esbensen, all of whom are members of the Oregon Symphony and of Fear No Music. They will be joined by violinist Erin Furbee (also a member of the OSO and FNM) and bassist Jeff Johnson (OSO member) on a couple of pieces. Also, actor David Loftus will read an excerpt from Viennese author Arther Schnitzler"s novella "Lieutenant Gustl."

The Marz name is a Priest's shortening of Marzena, and Marzena, a popular name for Polish women, means "dream." Priest liked that name so much that used it for the Marzena Performance Ensemble, which was featured in two music festivals that Priest created: the Seattle Spring Festival of New Music and World Arts (1988 to 1992) and the Seattle Summer Festival of New Music (1994).

"For a while in Seattle, I lived a few blocks from the Free Mars Cafe," says Priest, "which used to stay open until four in the morning. Anyway, it made me think of altering the ensemble's name. Also the first Mars landing happened on my 26th birthday."

This concert begins with "Chara," a string trio by Johan Paul, who is the head of the music department at Marylhurst University.

"Chara means joyous or to celebrate in Greek," explains Priest. "It sounds Americana, very motoric, very sprightly, a straight ahead piece. Incidentally, before Paul went into academia, he wrote some video game music for Atari. He's an interesting fellow."

Next is a work by Thomas Daniel Schlee, an Austrian composer and a professional touring organist who lives in Vienna and runs a music festival in the south part of Austria. Schlee and Priest have been friends since they met in Paris at a class taught by Messiaen in the late 1970s. Schlee's piece, "De Profoundis" is written for viola and double bass.

"This is a dramatic, tough number," says Priest.

Ines Voglar follows with by a short work by Xenakis, who would have been 85 years old had he lived longer.

"The Xenakis is an over the top glissandi piece," explains Priest. "It will push the envelope a little bit."

Next comes a tribute to Rostropovich. Adam Esbensen will perform the first two movements from Britten's seconds suite for solo cello.

"Rostropovich had a tremendous influence on Britten," says Priest. "Britten wrote five major works based on his connection to Rostropovich and that helped to transform the cello repertoire."

"Rostropovich is one of my absolute favorite people," adds Priest. "I saw him play on two occasions in Los Angeles, and he was electrifying. I couldn't sleep after hearing him play. I also got an autograph from him. He was larger than life. Another connection to Rostropovich is Ines. He conducted a youth orchestra that she played in and toured around Europe."

Next comes a short reading by David Loftus from Schnitzler's "Lieutenant Gustl" (which was retitled in the English version as "None but the Brave").

"I like to have something that is more than just music on the program," explains Priest. "This excerpt is an interior monologue by the main character who is sitting in a concert an muses on all sorts of things."

Interspersed between these pieces, the audience will hear selections from Karlheinz Stockhausen's "Tierkreis” (Signs of the Zodiac) which he wrote for music boxes. Priest has arranged three of these pieces for Voglar, Belgique, and Esbensen, who will play them from different areas of the stage.

After intermission, the Free Marz String Trio will play four movements of Priest's arrangement of Stravinsky's "Les Cinq Doigts" ("The Five Fingers"), which he wrote for piano in 1921.

"I'm calling my arrangement 'Four by Igor'" says Priest, "because he orchestrated the music for an ensemble of 15. So, I'm primarily using the original piano arrangement, but I'm also referring to the larger arrangement, too. So, my piece has four the of the eight movements."

"I wrote this piece in 1998," states Preist. "It has three movements and uses elements of Jimi Hendrix's music. It's all abstracted from and inspired by Hendrix's music, but it's not like the Kronos arrangement of 'Purple Haze.'"

The last number on the program is an arrangement by Darol Anger (current Portland resident and former violinist of the Turtle Island String Quartet) of Hendrix’s “Gypsy Eyes.” You may have have heard it on the TISQ's recording "Who do we thing we are."

"You have to put a lot of verve into this piece," says Priest, "and you have to sing and play at the same time, too."

Whew! That's a lot of new stuff! You can enjoy a reception of interesting food at the end of the concert, too. And it's all gratis!
Posted by James Bash at 7:44 PM