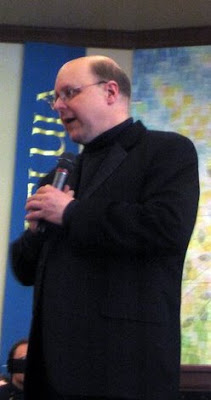 By Ralph Nelson
Artistic Director, Bach Cantata Choir
As you may know, I was able to spend almost three weeks at the Oregon Bach Festival this summer participating in what is known as the “Conducting Master Class.” This was an opportunity for me to learn from maestro Helmuth Rilling, professors Tom Davis (CalPoly) and Tim Sawyer (Northwestern, Minneapolis), and conductors such as Anton Armstrong (St. Olaf) and Nicholas McGegen (Philharmonia Baroque, Berkeley), as well as members of the orchestra and chorus. It was an amazing experience.

The main focus in our conducting classes was an examination of J.S Bach’s St. John Passion. We took it apart pretty much note for note and word for word over the course of 12 hours without Rilling, then another 20 hours with the maestro. We also worked on two Bach concerti and the Orchestral Suite in B Minor with Nicolas McGegen. The study of the St. John was particularly meaningful for me, since it was (and now really is) one of my favorite works – and a work that I thought I knew well. However, when Rilling began to show us all the symbols, motifs, etc. we quickly realized that what most of us knew about the work only touched the surface!

At times, I realized that I had so much to learn about Bach; but at other times, I was very proud of the work that we have done at the Cantata Choir, and that our “solutions” to various performance problems were right on the money. I chuckle at how many times I would look at a passage and say to myself – “you had better subdivide into 8 here” – only to hear Rilling say, “this is difficult, you must subdivide this place...”

I’d like to focus on some important things that I know many of you will be interested in:

2. Continuo: We had many sessions with the continuo players. In church cantatas, cello, bass, maybe bassoon, and positif organ are used. Harpsichord is not used in church cantatas, but it is used in chamber pieces. String Bass almost always doubles cello, even in recitatives, unless bassoon is used instead of cello – then bass doubles bassoon. OBF bass players all have extenders, because Bach apparently had a 5-string bass. Bassoon is used instead of cello if the movement has all double reeds (i.e. last year we had some 3 oboe pieces – bassoon would then be used, doubled by the string bass, with the positif organ). Bassoon and cello never play together (except in final chorales) unless Bach actually wrote distinct parts for them.

3. Recitatives: Rilling’s style right now (but not always the case in many of his recordings) is as follows: Recitatives are accompanied “secco” – meaning that the cello, bass, and organ hold the notes (or chords) for only 1 quarter-note, no matter what the actual value of note is in Bach’s score. This is done so that the congregation can hear the words better, especially in churches with significant ring-time. An interesting note is that all the cantatas written before Bach moved to Leipzig (1723) had recitatives that end with an arioso – but Leipzig cantatas have recitatives without ariosos.

4. Vibrato: The OBF chorus uses some vibrato – and frankly in my opinion it sometimes gets in the way. When that happens, the choir directors simply say “no vibrato” for this passage, and voila – the problem almost always goes away. The strings play with very little vibrato – and sometimes with none at all.

5. Phrasings: I was surprised by some things I heard. The chorus was asked to articulate (almost with “h’s” or tonguing), much more than I would have expected. This was really true on the “Sanctus” of the B Minor Mass. Many times words were totally split and even stopped in the middle – on the “Crucifixus” of the B Minor Mass, it was definitely, “Cru…Chi…fi-hix-hus”. I’m not sure I like it this way, but from time to time this year, I may experiment with tonguing or more articulation.

Obviously, Rilling’s methods are not total “gospel.” There are other great Bach specialists, including John Elliot Gardner, Joshua Ripkin, Ton Koopman, Masaaki Suzuki (and in the past decades Karl Richter and Nicolas Harnoncourt) that have different theories. But I think we can start with some of Rilling’s methods, because so much of what he does makes a lot of sense. For the most part, he is quite open to other methods, but he flatly dismisses the “OVPP” – one voice per part – movement, mainly because he felt Bach never did it that way, and his argument is quite convincing based on how many instrumental and choral parts we still have in existence. For example, in the St. John Passion there still exist 3 sets of Violin 1 parts – Rilling says, “now, why three sets? He must wanted 5 or 6 players, or he would not need these sets. He didn’t just go to Kinkos and make the parts. Remember that the Bach Family had to make these parts – Anna (Magdelena – Bach’s 2nd wife) and the girls ruled the paper, and that took hours; the boys copied the parts. What do think Anna would have said if she found out Sebastian had not used these parts? Trust me, he used three parts!”

NOTE: Both James Bash and I are singing in the BCC's inaugural concert of the '08-'09 season this Sunday, October 26, at 2pm at the Rose City Park Presbyterian Church on 44th and NE Sandy. Silent Auction begins at 130pm, and ends at 4pm after the concert.
LW
Posted by Lorin Wilkerson at 2:32 PM