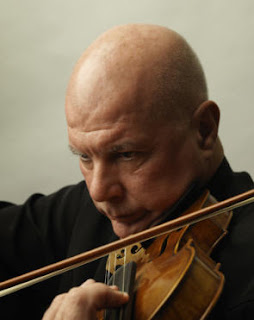 Tchaikovsky really knew how to create a barn burner when he wrote the String Sextet in D Minor “Souvenir de Florence,” Op. 70, and it really brought down the house at Thursday (July 23) evening’s Chamber Music Northwest concert. Even the first movement of Tchaikovsky’s gem, which started in electrifying fashion, succeeded to build tension, and then concluded with whirling dervish panache, took everyone’s breath away. I could actually hear the audience at Kaul Auditorium, which was filled to the brim, inhale collectively.

The six players on stage (violinists Elmar Oliveria and Benny Kim, violists Toby Appel and Melissa Reardon, cellists Raman Ramakrishnan and Hamilton Cheifetz) also excelled with their playing of nimble pizzicati passages, gorgeous melodies, lush chords, dashing runs, and whatever else Tchaikovsky threw their way. Twice in the fourth movement, they suddenly arrived at the same unison note and then flew away from each other like birds scatter to the winds. The very fast dance that concluded the piece caused the audience to jump to its feet and roar with approval. I’m sure that many audience members immediately thought of adding “Souvenir de Florence” to their collections if they didn’t have it already.

The concert began with Haydn’s String Quartet in F Minor, Op. 20, No. 5, which was performed by the Daedalus Quartet (violinists Min-Young Kim and Kyu-Young Kim, violist Melissa Reardon, and cellist Raman Ramakrishman). I liked the warm sound of this ensemble and how they pulled back the volume especially on passages that were repeats. Impressive also were Min-Young Kim’s plaintive sound in the second movement and her filigree which was juxtaposed with a lovely melody by her colleagues in the third. The faster but somewhat understated playing of the final movement rounded out Haydn’s music in fine fashion, and the ensemble received sustained applause from the audience.

Hornist William Purvis got a real workout in Mozart’s Quintet in E-Flat Major for Horn, Violin, and Two Violas. I loved the way that he could create a mellifluous sound despite jumping octaves and darting all over the place with ease. Aside from a couple of bobbled notes, it was peerless playing by Purvis. And his colleagues (violinist Benny Kim, violists Toby Appel and Melissa Reardon, and cellist Hamilton Cheifetz) supported Purvis with rich tones and a superb performance. Reardon, in particular, was very animated and looked like she was enjoying the collaborative music-making to the hilt. I’m sure that Mozart would’ve approved.
Posted by James Bash at 2:59 PM

I recently came accross your blog and have been reading along. I thought I would leave my first comment. I dont know what to say except that I have enjoyed reading. Nice blog. I will keep visiting this blog very often.

Thanks for the support!