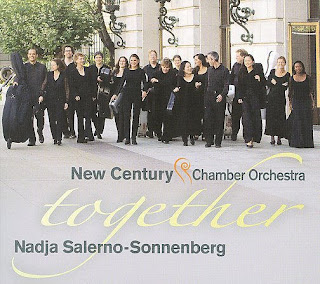 Violinist Nadja Salerno-Sonnenberg is known internationally known for her dynamic and virtuosic performances, but over the past few years she has successfully launched her own record label (NSS Music) and just last year she became the music director of the New Century Chamber Orchestra, a top-tier ensemble that is based in San Francisco. On August 11th, Salerno-Sonnenberg and the New Century Chamber Orchestra are releasing their first album (on the NSS label) called “Together.”

“Together” contains the world premiere recording of “Impressions: Suide for Chamber Orchestra,” by Clarice Assad, “The Four Seasons of Buenos Aires” by Astor Piazzolla, “Romanian Folk Dances” by Béla Bartók, and “Bess, You Is My Woman Now” by George Gershwin. In this album, Salerno-Sonnenberg performs as concertmaster and soloist, and you can tell right away that she has inspired her colleagues in the New Century Chamber Orchestra to give each piece everything they’ve got.

Last week, I talked to Salerno-Sonnenberg over the phone about her endeavors and her new collaborative recording.

Now you’re a triple threat as soloist, music director, and record producer. You must have a hectic schedule?

That’s a lot on your plate!

Salerno-Sonnenberg: I don’t know what I’m doing! What was I thinking!

I’ve been a soloist all my life, and it wasn’t until recently that I thought of exploring the business end of the music industry. I started my own label, and after that I signed a contract with New Century to become its music director. So now I seem to spend all of my time either on the computer or on the phone. I scramble to find time to practice!

How did you select the pieces for the album?

Salerno-Sonnenberg: Clarice Assad wrote the “Impressions” for New Century. “It’s a great work that begins with a theme and variations and reflects Assad’s impressions of the orchestra and me. This piece has been an instant success for us, and we decided to kick off the album with it.

When I first performed with New Century as a guest artist, I was learning Piazzola’s “The Four Seasons of Buenos Aires.” It was the perfect piece for me, and our performance went so well that I thought we’ll have to do it again! After I became music director of the group, we opened our first concert series with it and; so it became obvious that we should record it as well.

The Piazolla work that we perform is actually an orchestration by Leonid Desyatnikov that links the Piazolla’s music with the Vivaldi’s “Four Seasons.” Desyatnikov put in the quotes from Vivaldi and made the piece really wild.

In regards to the album, we thought that we could give it thematic shape. We had the Brazilian dance movement in the Assad and Piazolla’s tango; so we thought that we’d add Bela Bartok’s Romanian Folk Dances. Basically, we loosely based the album on dances and added the Gershwin as an encore.

Are the solos in the Assad piece improvised?

Salerno-Sonnenberg: They aren’t improvised, but she can write music so that it sounds that way. She has a terrific gift for that.

Bartok’s Romanian Folk Dances is a good change of pace.

Salerno-Sonnenberg: There aren’t many recordings of Bartok’s Romanian Folk Dances in the string orchestra version. I’ve wanted to do this piece with my orchestra and put our own in spin on it. I changed the arrangement somewhat so that I could spread the solos around the orchestra. I think that this piece fits perfectly with the Piazolla, which is so wild. I mean, you don’t want to hear a Tchaikovsky serenade after that.

It’s obvious from your playing that you love Gershwin’s “Bess, You Is My Woman Now.”

Salerno-Sonnenberg: Yes, I’ve played that piece my whole life. This is an arrangement by Jascha Heifetz, and he arranged almost everything from “Porgy and Bess” and tons of other Gershwin numbers. I played these “Porgy and Bess” selections from the time that I was real young because of my mother. She had heard Heifetz play some of them, and she got them – for violin and piano – for me. A friend of mind, David Rimelis, transcribed the piano part to the strings, and I’ve been playing that piece as an encore with orchestras for quite a few years.

So now that you are juggling three demanding careers when do you sleep?

Salerno-Sonnenberg: [Laughs!} Yeah, well a couple of hours a night. I sleep on planes. I’m blessed with very good health and a lot of energy. I’m lucky genetically to have that. It’s all working well for me, and I figure that while I have the energy, interest, and desire to do these things, I’m going to do them.

From the start, the chemistry between me and the New Century Chamber Orchestra was so natural and so obvious that it literally changed my life. It’s like all of a sudden you find out that you’re going to have a baby. So you change your life because it’s important to you. You find the time. New Century is an orchestra deserves world-wide recognition because of the outstanding music that they make. I’m going to help them to accomplish their goals as long as I can.

My focus is on being unique and to stand apart. For me, as concertmaster of the ensemble, I have to lead, but I have to blend as well. That’s a lot different than what I’m used to when I stand in front of an orchestra and play the solo. But I hate to mark in the bowings for everything.

I hope to see you with New Century some day soon.

Salerno-Sonnenberg: We are going to go on tour – not this season – but in the following season. I can’t say where we will tour right now, but I know that it’s being worked on.
Posted by James Bash at 3:15 PM