Three Bs get A+ treatment from the Oregon Symphony 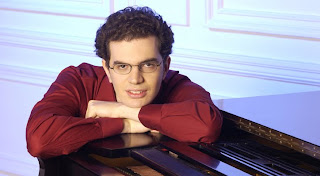 One of the great things about a fine orchestra is how it can play a work really fast, yet not sacrifice anything in terms of articulation and phrasing. That’s what I heard on Sunday evening at the Arlene Schnitzer concert hall when the Oregon Symphony under the direction of Carlos Kalmar performed a blitzschnell version of Beethoven’s 7th Symphony. Only the best orchestras can get away with this sort of thing without blurring the lines in the music and causing sonic train wrecks instead of giving shape to the music and executing pinpoint stops. I heard Gustavo Dudamel and the Israeli Philharmonic Orchestra tear through Tchaikovsky’s 4th Symphony with lighting speed in New York City last November to great effect, and the Oregon Symphony was just as scintillating with the Beethoven.

It was interesting to note that Kalmar directed the Beethoven without a baton, and I’m guess that he chose to do so because the orchestra members had this piece so ingrained that they could read his fingertips and gestures without hesitation. In any case, members of the audience were sitting up straight and leaning forward on their seats so that they wouldn’t miss anything. They heard brilliant volleys by the horns, beautiful exchanges from the woodwinds, and a shimmering buoyancy from the strings. During the fastest parts it looked like all of the strings were rocking out!

All of the Beethoven excitement came after hearing pianist Kirill Gerstein and the orchestra play Bernsetin’s Symphony No. 2, “the Age of Anxiety” with great depth and feeling. One of the magical moments in this piece came right at the very beginning with a quiet, far away, yet sustained sound from the principal clarinetist Yoshinori Nakao and assistant principal Todd Kuhns. I really enjoyed the interplay between the orchestra and the pianist, which included extended piano solos and orchestral responses. Together they built up tension and relaxed it only to build it once again. In the second part of the piece came a jazzy passage that seemed to free-up the overall mood, but it was the beautiful and majestic climax at the end that finally guided the audience to new vistas and hope.

The concert began with Bach’s suite No. 4, which the orchestra excelled in conveying a dancing, Baroque sensibility. Sometimes the orchestra’s sound percolated to the top and at others it was stately and regal but still light-afoot. Kalmar, again directing without a baton, conveyed the just the right mood with spry movement on the podium and that helped to make the piece a delight to the ears.

You might not have been able to see it from your vantage point, but he started with his usual baton, then lost it in the first movement, narrowly missing Assistant principal cellist Marilyn D'Olivera!

Dang! I missed that! I thought that he started with a baton, but I must have closed my eyes, because I missed the real action!