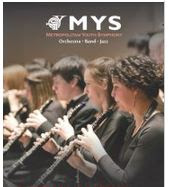 The Metropolitan Youth Symphony is a Portland institution. Founded by Lajos Balogh in 1974, it gives young people the opportunity to play and perform in band and orchestra settings beyond the typical high school milieu. MYS incorporates 438 local students in 13 ensembles in 11 yearly concerts. On June 9, the MYS gave its spring concert, "Finale", at Arlene Schnitzer Concert Hall, in which the Jazz Band I, the Concert Orchestra and the Symphony Orchestra presented their offerings in fine form. Derek Sims conducted Jazz Band I, Ken Selden conducted the Concert Orchestra, and Andres Lopera, Balogh's successor, conducted the Symphony Orchestra.

If you happen to live or "vacation" in or around Lake Oswego, as I do, you may have seen the erstwhile director of the Metropolitan Symphony Orchestra and beloved local figure, Lajos Balogh, as I did recently at an art opening. Over cheese and wine, the Maestro with personable blue-grey eyes and bushy Einsteinesque hair may answer questions about how his tenure in Oregon came about (his Hungarian mother preferred that he move to Oregon, where she was, rather than to continue to tour on the east coast as a violinist) how Oregon got its name (German immigrants traveled north from California in search of rain, which reminded them of home, and then exclaimed, 'Oh! Regen!') and which concert repertoire he likes best (rather evenly, as if to preserve the egos of the composers involved, he stated that he likes all of it). Those who have seen Maestro Balogh speed by in his red sports car, bearing the license plate tag, "HAYDN", however, know that he has at least one favorite. Mr. Balogh was present at this concert, and received an ovation at intermission before Andres Lopera took up the baton in conducting the Symphony Orchestra.

The concert opened with Jazz Band I, conducted by Derek Sims. "Samba De Rollins" by Don Menza featured the brisk, uptempo drumming of Grace Choi. Randy Brecker's "Some Skunk Funk" followed, with competent solos from each section of the band. "Fingers", a Thad Jones tune, featured a piano and trumpet duet with the pleasant noodling of a muted trumpet contrasting with the crisp piano chording of Justin Salisbury. The trumpet section, the largest in the band, impressed by being in tight ensemble throughout and in good balance with the rest of the group.

The Concert Orchestra then took the stage to play the dark, brooding opening of Beethoven's "Overture to Egmont", which was conducted both defiantly and lyrically in proper Beethovenian spirit by Selden, who is also the conductor of the PSU Symphony. The final section was particularly well done, with an accelerando and crescendo that were truly exciting. The sole trumpet of the orchestra, Nolan Sester, was notable in this piece for his good intonation and phrasing.

Faure's prelude to the  "Peleas et Melisande Suite" followed. This selection appeared to be a favorite of the orchestra, especially of the strings, who seemed to fall into the lush string writing with pleasure. The opening phrases were warmly and expressively played. The highlighted woodwind section gelled during the Faure.

The Haydn Presto is from Symphony No. 100, Haydn's "Military" symphony, which features the so-called "Turkish" instruments of the day, such as timpani and triangle. It opened with crisply articulated and bouyant phrasing and continued with good dynamic contrast throughout. After this bout of Haydn's typically rhythmic and good-natured tomfoolery, the audience repaired to the Schnitzer lobby in a fine mood to cogitate and imbibe before the second part of the program.

After the intermission, the Symphony Orchestra assembled on stage and Andres Lopera, introducing himself as Balogh's successor, took the baton. Lopera, originally from Columbia, studied at the University of Texas and New England Conservatory. He is finishing his first year at MYS.

Lopera's conducting is precise and energetic, and the orchestra responded in kind to his direction. During Brahm's ''Academic Festival Overture,'' a brooding motive in the strings is gradually joined by brass and woodwinds. The piece contains long string sections of both lyricism and profundity, jettisoned by sprightly rhythmic upsurges. The bassoons and oboes charmed in their delivery of this rhythmic motive before it repeated in other sections.  (Brahms seemed to like the triangle, perhaps as an homage to Hadyn, and puts plenty of it in the impressive crescendo at  the end.) It's a heavy offering, which, like much of Brahms, must be carried like a large piece of furniture in danger of bumping into corners. The Symphony Orchestra handled it well.

The opening of Dvorak's Symphony No. 8 was conducted with great expression by Lopera. The orchestra was at its best in this symphony. The strings at times achieved a near-professional sound, with an impressive warmth and dynamic range displayed in the lyrical passages of the Allegretto. Uncommonly sensitive playing was produced throughout by a young bespectacled bassist. The entire cello section tackled its several unison themes savagely, deeply, and soulfully as required in the various movements. There was lovely phrasing of the flute solos which alternate in question and answer phrasing with the orchestra.

The finale of "Finale" was a piece written by the pianist Michael Allen Harrison, entitled "Samba."  Harrison, attired in a melon green shirt and sporting a suave grey halo of hair, ambled onto the stage to introduce it. He wrote this piece in the 90's to spotlight his drummer, Israel Annoh. Harrison and Annoh started out the samba, and were joined by the orchestra and jazz band. Lopera invited the audience to dance before this piece, and indeed, this frothy tune with its sweeping string phrasing put me in mind of dancing on the Love Boat with Lucy and Desi Arnaz, and perhaps the Skipper and Marianne, too. The piano, drums, jazz band and orchestra were suprisingly well blended, and this piece ended the evening on a a spicy up-note.

Tri-Met bus riders informally polled (OK, they were just spontaneously gushing) after the concert were definitely satisfied.
Posted by James Bash at 4:53 PM