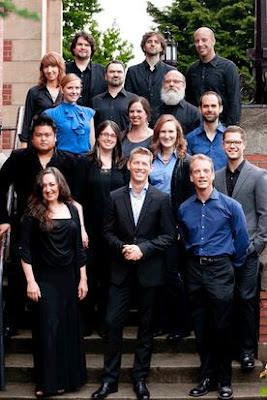 One of my voice instructors in college said, in a course on voice pedagogy, that the first task a singer has is to "establish the instrument." As I recall, he meant that one possesses the vocal instrument, but needs to "establish" it: be there with it, utilizing all the skill, technique and communication one has learned, and not to rely on gimmickry or over-dramatization.

The ten members of The Tudor Choir did just that last Saturday (July 26th) at St. Mary's Cathedral. They were sponsored by Cappella Romana in a program combining their two evenings at the recent Abbey Bach Festival at Mount Angel Abbey. These youthful singers "established" themselves extremely well, under the expert direction of Doug Fullington who has led this group since 1993. Throughout the evening the audience was treated to a cappella singing at its best, with pieces ranging from Palestrina and Victoria through Buxtehude to J. S. Bach.

Singing this material with so few singers, probably in keeping with the original performances, is no mean feat. Singers are exposed and cannot rely on their nearest neighbor in their section to see them through a glitch or two. Nor can a singer be a soloist in such an ensemble. He or she must be attentive at all times to the choir and its conductor, creating a unified sound. And that sound fit perfectly into the acoustic of the Cathedral.

Many of the works were for double choir and the singers were arranged in various orders to accommodate that. Three settings of the Canticle of Mary, the Magnificat, by Marenzio, Palestrina and Hieronymus Praetorius, were sung: the first two for double choir and the last for a larger group (as far as I could determine, four sopranos, alto, tenor and bass as one group, and an alto, tenor and bass in the other). Marenzio's and Palestrina's settings were not at all imitative of each other. Palestrina used a kind of "call/response" with various phrases of the text; for example, fecit potentiam in brachio suo… ("he has shown strength with his arm") was answered by the other choir with …dispersit superbos mente cordis sui ("he has scattered the proud"). In the Praetorius setting, two sopranos intoned each verse, with a lively and syncopated Gloria Patri at its end. The intonations sounded superb in that space and provided an excellent contrast to the full choir.

Seasoned listeners to this kind of choral music were no doubt thrilled by an excellent performance of Palestrina's Sicut cervus ("as the deer longs"), a piece that can be humdrum and hackneyed but not with The Tudor Choir!

More contrast with pieces utilizing the same text, settings of Alma redemptoris mater ("Loving Mother of the Redeemer," a Marian antiphon), by Palestrina and Victoria, were interesting from the standpoint of contrast, Victoria's being more flowing.

A Missa Brevis (i.e., containing only the Kyrie and Gloria in excelsis of the full Mass) by Buxtehude was performed after the intermission. This, to me, was the most interesting piece on the program. If the composer's name would not have appeared on a program, I would have thought that it was from an earlier era, say the late 16th century, rather than from Buxtehude's 17th. The "mood changes," as at Qui tollis peccata mundi ("You take away the sins of the world"), were lyrical. At miserere nobis ("have mercy on us"), chromatic writing takes over, preparing the listener for a stunning Cum Sancto Spiritu ("With the Holy Spirit") and a very chromatic "Amen."

Selig sind die Toten ("Blessed are the dead") by Heinrich Schütz followed, and I wondered if Johannes Brahms knew this work and was inspired to write his setting of this text in his Requiem almost 200 years later?

The program concluded with J.S. Bach's noble motet, Komm, Jesu, komm ("Come, Jesus, come). Having sung this work myself a few times in much larger choirs, it was refreshing to hear it done by these ten singers who were arranged in two-choir formation: two sopranos, alto, tenor, bass; then bass, tenor, alto and two sopranos. This provided a "wall of sound" that would not have been possible with another arrangement. The concluding Chorale, Drum schliess ich mich in deine Hände ("So I give myself into Your hands"), was stunningly beautiful, with an execution of Bach's ornamentation very much evident and articulated well.

An added treat was a brief encore, a setting of the Jubilate by Mozart.

The performance was practically flawless and thoroughly enjoyable. However, one soprano, with an excellent instrument by the way, could have been somewhat more restrained. This ensemble is as much fun to watch as to hear. They are so obviously into this music and enjoy singing it to the full.

Fullington is something of a Renaissance man. According to the program notes, he is a singer, (counter-tenor, a rare breed), and a dance historian, specializing in reading a certain kind of classical ballet notation system. He is the founder of the Tudor Choir, which has performed jointly with the Tallis Scholars; they are currently a resident ensemble at Blessed Sacrament Church in Seattle's University District.
-------
Phillip Ayers sings with the Portland Bach Cantata Choir and for ten years sang with the Portland Symphonic Choir. From 2001-2007 he produced and hosted "Choral Classics" on All Classical radio. A retired Episcopal priest, he and his spouse are former church organists and choir directors and now enjoy "sitting in the pew" at church and concerts.

My brother attended this concert and thought it was superb!