Bell and Spano team up with Oregon Symphony for stellar concert 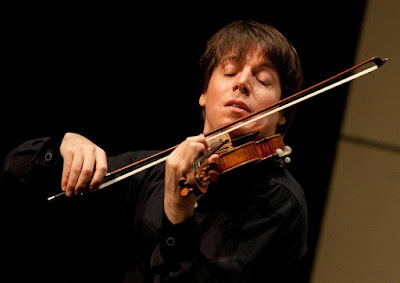 The mood of the music moved from introverted to extroverted at the Oregon Symphony’s concert on Monday night (February 22), beginning with a sublime selection from Wagner’s “Parsifal” to Sibelius’s inward-looking Sixth Symphony, followed by Bruch’s sweetly expressive Violin Concerto No. 1, and finally the stately pomp of the Prelude to Act 1 of Wagner’s “Meistersinger von Nūrnberg.” Guest conductor Robert Spano and superstar violinist Joshua Bell were the featured artists. While Bell has appeared frequently with the Oregon Symphony over the past several years, the concert marked Spano’s debut with the orchestra.

Bell was the big name, of course, and he drew a capacity audience on the third and final evening of concerts with the OSO. He has probably played the Bruch a million times, but that didn’t deter him from pouring every ounce of his musical talent into his performance. His stellar playing featured immaculate runs, sweet legato lines, thrilling high notes, marvelous attacks, and trenchant double-stops. His interpretation was wonderfully nuanced so that each phrase – whether fast or slow, long or short – was never boring. Together with excellent accompaniment from the orchestra under the direction of Spano, Bell’s performance connected so well with the audience that they went bananas and showered him with cheers and applause that brought him back to the stage three or four times.

But even if you took Bell out of the programming equation, this was a terrific concert because Spano was at the top of his game, eliciting a superb performance from the orchestra in the three other pieces, starting with the Prelude to Act 1 of “Parsifal.” The opening theme was introduced with great sensitivity by outside line of first violins and the outside line of second violins, and principal trumpeter Jeffrey Work made it glow even brighter. The other themes expanded naturally into the orchestra with the brass choir evoking a polished sound that positively shimmered. You didn’t have to know anything about the themes (leitmotifs) and how they related to the opera, because the orchestra’s performance created the sense of clouds parting and revealing a clear day with gleaming sunshine. Ah!

Sibelius’s Sixth Symphony received an intimate performance that touched on all sorts of intriguing subtleties. Lush melodic lines from the strings, playful passages from the woodwinds, and close-hewn phrases form the horns contributed to the optimistic opening in the first movement that then closed enigmatically. The busy second movement gave way to a more deliberate third movement with its loud snappy ending. The fourth featured a bunch of intricate passages in which various sections of the orchestra seemed to exchange phrases. The pillowy landing at the end of the piece cushioned the fading tones, creating a sense of expansive landscape that goes on and on … or just oblivion. Spano waded into the orchestra to recognize the superb contributions of the principal woodwind players: bassoonist Carin Miller Packwood, flutist Alicia Didonato Paulsen, oboist Martin Hébert, and clarinetist Todd Kuhns.

Spano guided the orchestra through the Prelude to Act I of “Die Meistersingervon Nūrnberg with a combination of gestures that were never flashy or overstated. The music just seemed to evolve in completely natural way. The amazing brass sound, in particular, was slightly brilliant rather than dusky. The woodwinds had a field day with their perky passages. Even though the orchestra showed flashes of increasing volume, Spano kept it all under wraps until the final measures when he let all of the horses out of the barn. It was just glorious, but it would’ve even been more spectacular if there were ten more violinists sawing away. More violins would have created a better sonic balance. But that is just a nit in an evening of superior-grade music making.

The orchestra itself seemed to have the best time ever and concertmaster Sara Kwak led the complimentary statement by not getting out of her chair when Spano shook her hand. He had to bend over and practically haul her into a standing position. Only then did the rest of the orchestra stand. This, in my book, showed how much regard the orchestra had for Spano. Let’s get him back here again pronto pronto!-- And Bell, too, of course!
Posted by James Bash at 11:06 PM

Wake me up when Bell comes to town playing something other than the same old same old. Heck, who does he think he is, Perlman?

I agree, I went for the Sibelius and the Wagner. Of course, Bell's performance was magnificent and authoritative, but I have to ask, was the piece worth it? If it had to be standard repertory, couldn't we have Brahms?

I agree. My understanding is that Bell gets to chose whatever he wants to play. It would be really refreshing if he would play a concerto outside of the four or five that are always played.

Thanx for your note, James.
It's a shame that someone as young as Bell is already an old fogey when it comes to the enormously rich & varied violin repertoire.
Thank heavens we have truly curious & vibrant spirits like Leila Josefowicz, Anne-Sophie Mutter, Gidon Kremer & Hilary Hahn to vividly remind us that being a top-tier artist can include more than mere cruise control career coasting.