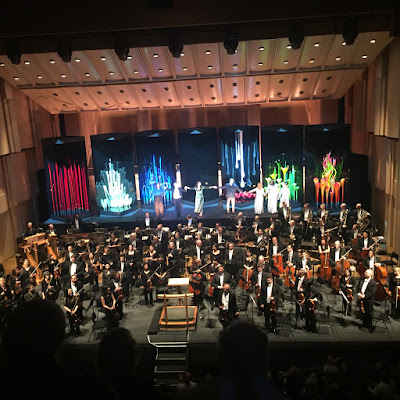 The Oregon Symphony broke into new territory with an impressive, operatic production of Béla Bartók’s “Bluebeards Castle” on Saturday evening (September 24th) at the Arlene Schnitzer Concert Hall for the first concert of its classical series. The orchestra has performed operas before, such as “Porgy and Bess,” but has done them in the usual concert format with stationary singers and chorus. This time, as part of its new SoundSights series, the orchestra collaborated with renowned glass artist Dale Chihuly to mount his sets on a large stage located behind the musicians. The powerful and evocative voices of soprano Viktoria Vizin and bass-baritone Gábor Bretz soared above the orchestra, conducted by Carlos Kalmar, to deliver a mesmerizing interpretation of Bartók’s dark masterpiece.

Excellent stage directions by Mary Birnbaum contributed deftly to the performance. Vizin gave a convincing portrait of Judith, Bluebeard’s newest wife, who wants to know what lies behind each door of his castle. Bretz, in the role Bluebeard, reluctantly gives in, and the secrets of his soul are exposed in a symbolic way. Depicting the seven doors were seven very tall cubes that could be turned to reveal Chihuly’s colorful glass sculptures. A thicket of red spears represented Bluebeard’s torture chamber. Long white stalactites positioned above a pool of red orbs elicited Bluebeard’s lake of tears. Each glass creation was enhanced with the lighting of designer Justin Dunlap. The final door held Bluebeard’s previous wives, who Judith joined while the orchestra wailed loudly with clashing, dissonant chords.

The orchestra deftly created all sorts of emotional states that perfectly accompanied the story. The forbidding doom and gloom at the outset laid out a fog of heaviness. The shrieking violins caused listeners to sit up straighter when the torture chamber was revealed. The massive volume of sound that announced Bluebeard’s vast kingdom was impressive as hell (figuratively). The hour-long piece surged up and down and swirled the audience in a sound-world that finally dimmed down to nothingness when all of the lights in the hall were turned off.

In the first half of the program, the orchestra sparkled with its performance of Mozart’s Symphony No. 31 (“Paris”). The strings excelled with fleet fingerwork and a silky sound in the first movement. The sweet, flowing style of the second was transported with a wonderfully relaxed (but not too relaxed) tempo. Kalmar and company kicked things up a notch or two in the third, allowing the fugue-like passage to shine brilliantly.

The concert opened with a world premiere of Chris Rogerson’s “Among Mountains” in honor of the Oregon Symphony’s 120th birthday. Rogerson, a young East-coast composer, who grew up with family vacations in Oregon, wrote the short piece (about five minutes in length) not as a fanfare, but as a strong statement of the majesty of the Cascade Range. It featured a wistful solo for offstage trumpet that was marvelously played by Jeffrey Work. The orchestra, together, also created a warm series of cascading sounds that suggested waterfalls and rivers. There was a bit of Copland-esque atmosphere in the work, but it also expressed a lovely lyrical quality that I’ve heard in Rogerson’s works that were played a summer or two ago by Chamber Music Northwest.

There was a big buzz in the lobby of the Schnitz after the conclusion of “Bluebeard’s Castle.” It was a veritable hit. For readers who might wonder where the Chihuly sculptures go after the final concert on Monday night. I found out from Jim Fullan, the orchestra’s Vice President for Communications, Marketing, and Sales, that they will be transported in special crates to one of Chihuly’s warehouses for subsequent rentals. The production has been used by a few other companies. They originally debuted with the Seattle Symphony a few years ago.
Posted by James Bash at 5:09 PM

Saw it last night, James, and I am in total agreement with your review. Very impressive concert indeed. Thanks by the way, James, for providing quality commentary on the performing arts, which is essential given the Oregonian's seeming abandonment of that aspect of our community.

Actually, The Oregonian has stepped up their arts coverage quite a bit recently with fine preview articles by James Bash & Brett Campbell. I hear that this upgrade in servicing our community is due to their news arts editor, Amy Wang. Kudos!

Good point Bob. But I hope that they don't give up completely on reviews.