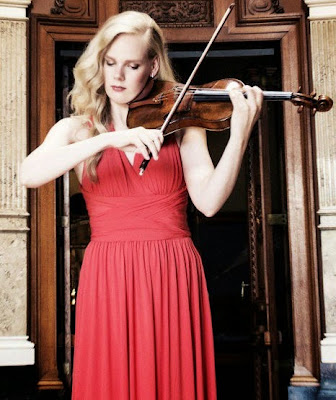 It was great to see British conductor Michael Francis back at the Schnitz on Saturday, October 11th. He turned in terrific concerts in his Oregon Symphony debut with only 24-hours’ notice in February of 2011 and again with just a couple of weeks’ notice in April of 2011. This time, he was on the regular schedule to lead the orchestra in works by Mozart, Stravinsky, and Richard Strauss. The highlight of the evening, however, belonged to Dutch violinist Simone Lamsma, who gave a breathtakingly beautiful performance of Erich Korngold’s Violin Concerto.

Completed in 1945, Korngold’s Violin Concerto is a late, late Romantic work with expansive melodies and room to emote. Lamsma opened the piece with a warm and inviting tone that swept up the audience into a lush, uplifting terrain. She was equally adept at creating a sweet sound in the slower second movement and brought out the emotional content of the subdued passages. For the third movement, her playing was carefree yet totally spot on as she whipped through the wickedly difficult prestissimo sections, including some deft transitions that featured whispery high phrases. Niel DePonte added just the right amount of additional sonic color with his contributions on the xylophone.

The odd piece on the program was Stravinsky’s “Orpheus,” which he wrote for Georges Balanchine as a ballet (premiered in 1948) in three scenes with twelve episodes. Some scholars feel that this work with its incredibly restrained and austere style represents the high point in Stravinsky’s neo-classical period. No kidding. Even with the help of projected titles it was difficult to experience the music in terms of telling the Greek legend of Orpheus going into Hades to retrieve his bride Eurydice only to lose her at the last moment. Except for one brief forte blast, the entire piece was played with the volume varying mildly between piano and mezzo piano. A bar of silence marked the crucial moment after Eurydice falls dead after Orpheus tears the bandage from his eyes and gazes back at her. And the Maenads (female worshipers of Dionysus)violent attack on Orpheus was conveyed by mild pizzicatos and dampened staccato lines. Perhaps this piece can grow on a person after being heard multiple times, but tepid and almost distant sonic qualities seem to be a week interpretation for such a potent tale. Apparently Balanchine wanted to choreograph the story in terms of stations like “stations of the cross.” So the arid, static style that Stravinsky created was just the right thing. In any case, the orchestra played with pristine clarity, and there were many highlights, including the weeping sound of Orpheus from Jennifer Craig’s harp, a duet by oboists Martin Hebert and Karen Wagner, a duet by concertmaster Sarah Kwak and flutist Jessica Sindell, solos by cellist Nancy , Kyle Mustain (English horn, flutist Sindell, and a mournful final lament from the horns and trumpeter Jeffery Work.

The orchestra delivered a spirited performance of Strauss’s “Till Eulenspiegels lustige Streiche” (“Till Eulenspiegel’s Merry Pranks”), delightfully shifting between the serious and humorous moods in the music. John Cox, principal horn, played the prankster’s signature tune with élan. The percussion battery raised havoc. The strings put a little extra sashay into the waltzy passages, the flutes danced about playfully, the bassoons grumbled, the brass and snare drums put their feet down, and clarinetist Mark Dubac, created the final squeal on behalf of Til.

The concert began with Mozart’s Symphony No. 32 is a little gem – a symphony in one movement that passes by in less than ten minutes. Francis chose to conduct the piece without a baton and that worked very well. Under Francis, the orchestra played with elegance and refinement, but it seemed that some of passages could have used more dynamic nuance (for example, push the tempo forward and bring it back) just to take things up another notch.

Overall, even considering the severe unemotional flow of the Stravinsky piece, the orchestra played extremely well under Francis, and it would be a pleasure to hear him and Lamsma again.
Posted by James Bash at 10:31 AM