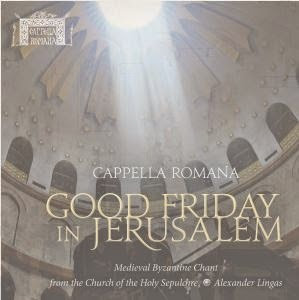 If you have ever wondered what it would be like to hear music from the 8th and 9th centuries, then you should listen to Cappella Romana’s latest album “Good Friday in Jerusalem.” In this recording, the men of Cappella Romana sing Byzantine Chant from the “Service of the Holy Passion of our Lord Jesus Christ” as done at the Church of the Holy Sepulchre in Jerusalem. Byzantine Chant refers to a style of liturgical chant that was developed during the Byzantine Empire (approximately 330 to 1453) and into the 16th century.

The 17 selections in Cappella Romana’s recording start with a procession to the Mount of Olives and continue to other stations such as Golgotha, the Church of the Holy Wisdom, and the Chapel of the Holy Custody. The pace is deliberate and bold. In most of the selection, one or more group of men chant the text (for example, a Psalm) and they are supported by a drone of baritone and basses. Some of the chants feature a slight wiggle in some of the tones. At other times, the chanter’s voice might slide between tones, giving the music a Middle Eastern flavor.

It’s fascinating to hear the shifts in tone because the chant and the drone move absolutely together. No one takes a back seat here. Both the chanter(s) and the droning chorus are equally strong. Most of the chanting is sung in the baritone range, except one section when the singers admonish “Impious and lawless people” who “meditate vain things." That’s when the tenor range is in full bloom.

The expertly researched liner notes from Cappella Romana’s artistic director Alexander Lingas provides plenty of background material for this music, and the texts are printed in Greek and English. Unless you understand ancient Greek, one of the few words that is recognizable is “Christus” (Christ).

With its arresting, beautiful music and testament to faith, “Good Friday in Jerusalem,” recorded at the Stanford Memorial Chapel in 2013, is another feather in Cappella Romana’s cap. The ensemble has released over 20 albums, and they have a long ways to go, because, if you consider that the Byzantine Empire lasted a thousand years, there a lot of Byzantine Chant still waiting to be discovered.
--
PS: "Good Friday in Jerusalem" is currently number 8 on Billboard classical chart.
Posted by James Bash at 11:12 PM