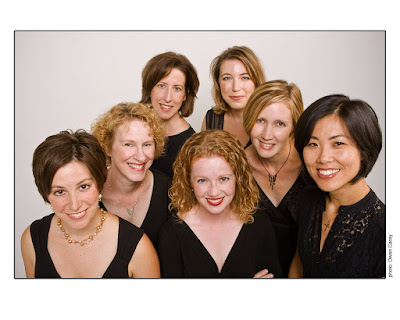 In Mulieribus, Portland's all-women early vocal music ensemble, will present the final concert of their '07-'08 season this Sunday at St. Philip Neri Catholic Church in Portland. I've heard this incredibly talented group perform live before, and have since wanted to speak with them about their music. Anna Song, the group's Artistic Director (far right in the above photo of In Mulieribus), took time out of her busy schedule to answer some questions via email about the offerings in their season finale.

The upcoming concert is entitled "Fins Amours: Medieval Songs of Courtly Love." Could you tell us what 'Fins Amours' translates as, and how the conceptof courtly love was dealt with by the composers inyour program?

Anna: Fins Amours translates to "fine" or "refined" love, and refers to the concept of courtly love which originated in late 11th century France. First expressed in the lyric poetry of the troubadors and trouveres, various musical forms emerged along side the poetic forms as composers sought a means of expressing the various facets of this idealized love. The composers featured on our program such as Machaut, Landini and Dufay developed new ideas and compositional styles through their settings of courtly love poems, and were inspired to reflect this poetry through musical ideas.

I think a lot of us have some sort of a vague notion of the concept of 'courtly love,' but what do you think it meant to, say, Machaut for instance?

Anna: I'm not sure I can speak confidently regarding what courtly love might have personally meant to Machaut. What I have read is that he may have believed, along with others of his day, that the experience of loving another with great passion and fervor had the potential power to purify and elevate the the lover...in this way, his poetry and music was a means of expressing hope.

What time periods are represented in this concert, and what are some of the stylistic differences that we should listen for from work to work?

Anna: The repertoire for this concert spans the 12th through the 16th centuries. Everything from monophonic songs with just one tune to motets with three different texts and melodies will be featured. I also hope the audience will experience a bit of what it must have been like to hear when composers first used the sweeter intervals of thirds and sixths, after hearing music dominated by the perfect intervals of fifths and octaves. Dufay's Adieu m'amour, presented towards the end of the program, beautifully exemplifies this development.

What are some challenges specific to singing medieval music, both in terms of the individual singer's voice and from the ensemble perspective?

Anna: The main challenge in singing the music for this concert has been dealing with text! We've never had to work on so much of it in one concert before, especially given that much what we're singing this time is in Occitan French. Add to that the fact that double motets have different texts in each voice, and it has taken us longer than usual to work out pronunciation and matching vowels. The other challenge we generally face is finding and singing music that fits into the tessitura of our group -- with all women it's a bit tricky, and when we do find music, we transpose it quite far from what's "written".

Do you write out the transpositions, or is it something that is done on the fly by the singers as you practice and perform?

Anna: I don't transpose the works out for the singers -- I simply tell them ahead of time what the transposition will be and then we go from there.

Do you have a particular favorite from this concert set? If so, which one, and what is it that endears this piece to you?

Anna: It's difficult to name one favorite, but if I could name two, I'd include Riches d'amour by Machaut and Adieu m'amour by Dufay. The melody of the first piece touched me the first moment I sang through it as I searched for music. The first phrase is so expressive and heartwrenching. The Dufay piece is also particularly beautiful -- it's worth noting that I have a passion for Renaissance polyphony and perhaps explains why I'm drawn to it. Its melodies truly exemplify the new direction that polyphonic music began to take, and Dufay's flowing melodies are not only fun to sing but they transmit the emotions depicted in the text.

So is this piece by Dufay an example of the beginning of this transition away from dominance by the perfect intervals, or is it a fully mature work of the newer style?

Anna: Dufay's work is considered quite sophisticated, so I'd say it is a mature work relative to his generation and his overall output. It's not the earliest example of the beginning of a move toward the use of other consonant intervals relative to music history, as it exhibits the influence of the English style, e.g. Dunstable, where such intervals had become more common.

Anna: Thank you so much for doing this interview and previewing the concert...we appreciate it very much!
Posted by Lorin Wilkerson at 5:46 PM