Review: The Rape of Lucretia at Central City Opera 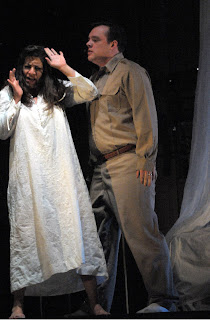 The thought ‘I am right and you are wrong’ is a motivating factor in human deeds and misdeeds from the earliest of times, and in “The Rape of Lucretia,” a powerful opera by Benjamin Britten, the misdeed prevails and wreaks terrible havoc. The opera retells a piece of history dating back to ancient Rome in which the virtuous wife of a Roman general was violated by an Etruscan prince, who wanted to win a bet at all costs. Presented by Central City Opera (Colorado), “The Rape of Lucretia” speaks well to modern audiences even though some may not be familiar with the Christian message that Britten wrapped around the story.

I heard the Central City Opera production on Thursday evening (June 12th) as part of the music critics conference in Denver. The opera company used busses to transport the critics and other participants in the National Performing Arts Convention to Central City, which is located at 8,000 feet above sea level. The Victorian era mining town has a beautifully restored theater, the Central City Opera House, which seats 500 people for its productions that run during the summer.

A strong performance by Phyllis Pancella as Lucretia made the tragedy come alive with poignancy and depth. Pancella excelled at displaying a wide range of emotions that included pure love and trust, defiance, anger, anguish, confusion, and derangement. As Tarquinius, Brian Mulligan sang well but was limited in his emotional reach as a man who insanely resolves to force himself on his friend’s wife. His face seemed to be strangely wooden most of the time.

In the role of the male chorus, Vale Rideout’s ringing tenor was superb but often too loud. Melina Pyron performed very well as the female chorus. When they first appeared, carrying books, I thought that they were reading from scores, but it gradually became apparent that they were relating the story as if it were in printed in the books.

Maria Zifchak as the servant Bianca and Sarah Jane McMahon as the servant Lucia were outstanding. McMahon’s sparkly aria that greeted the dawn of a new day contrasted powerfully with the atmosphere created by the rape the evening before.

The orchestra was aptly conducted by British conductor Damian Iorio, who made his United States debut with this production.

Stage direction by Paul Curran had many good points mixed in with the less effective. For example, I didn’t understand why the male and female chorus had to be present in every scene, especially when they had large sections in which they didn’t sing. Their presence in those parts of the opera seemed distracting.

This production was set in the years following WWII with a rough-hewn room serving as the setting initially as barracks of the military men and later as the bedroom in the home of Lucretia and Collatinus. The pool of water near the front of the stage was a brilliant touch, especially as a symbol of making oneself pure.

The undercurrent of rebellion (for example, when the Roman people sang “Down with the Etruscans” and other messages of protest) took place offstage, which unfortunately reduced the impact of why the rape became a major point in Roman history. That is, general outrage broke out after the rape became known, and the Roman people successfully threw off the yoke of the Etruscans.

The Roman generals wore the plainest of uniforms and Tarquinius looked more like a private than a prince. His military clothing needed some distinguishing ornamentation, such as medals.

Overall, Central City Opera’s production of this thought-provoking opera was successful, making us ponder what our reaction would be to a terrible thing like rape, and what it all means in the greater scope of things.

For more information about Central City Opera's "The Rape of Lucretia," click here.

For more information about the classical music critics conference, see the posting on June 10th.
Posted by James Bash at 12:53 PM