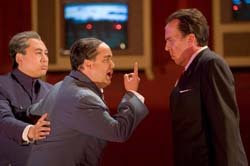 Richard Nixon’s trip to China in 1972 was an event of historic proportions, especially for a politician who was thoroughly opposed to communism right down to the blood cells of his bone marrow. The opera “Nixon in China,” written by John Adams, retells the story of Nixon’s trip to China, mixing the public aspects of the trip with introspective musings by some of the main players in the event.

Opera Colorado gave an inspired performance of "Nixon in China," which I saw (June 13) as part of the classical music critics conference in Denver. This was a co-production with Opera Theater of St. Louis, Minnesota Opera, Portland Opera, Chicago Opera Theater, and Houston Grand Opera. I saw this production in Portland during its 2005-2006 season, and it continues to hold up very well.

Of course, any production that features Robert Orth as Richard Nixon is in for a treat. With his hands in his pockets and hunched shoulders, Orth has developed an uncanny ability of mimic Nixon in every which way. The arrival scene and the dinner celebration with the cordial and thoughtful Chou En-lia, sung wonderfully by Chen-Ye Yuan is fascinating.

Marc Heller's old yet energetic Mao Tse-tung would forcefully spout off at anything that Nixon said (for example, "We no longer need Confucius. Let him rot."). Maria Kanyova created a compassionate Pat Nixon. Tracy Dahl as Madame Mao (Chiang Ch'ing) could scare the bejesus out of you. Thomas Hammons was outstanding as the somewhat bumbling Henry Kissinger and as the bad guy in the communist ballet. (Hammons sangs the Kissinger part in the Nonesuch recording.)

Conduct Marin Alsop made sure that the pace went well. The three secretaries and the chorus went off-track briefly in the second act, so I'm not sure if they were waiting for a cue from Alsop or if they counted incorrectly. The meter in this opera changes constantly, so confusion can arise at almost any given point.

The love-duet portion of the ballet always surprises me because of the melodic detour into the land of Richard Wagner's "Tristan und Isolde." I also enjoyed the ballroom dance inspired music in the third act, but, unfortunately, the characters have few interesting things to say.

The use of television sets and documentary footage of the actual trip in 1972 added context. Directions by James Robinson and choreographer Sean Curran were excellent.

The Ellie Caulkins Opera House is a beautiful venue. I sat in the mezzanine level and was just under the balcony above me, and that seemed to have cut back some of the sound. The biggest problem of the evening was getting the audience seated. Lots and lots of people were seated well after the first act began, and the same thing happened again after the second act began. I hope that this was just an aberration.
Posted by James Bash at 8:49 PM