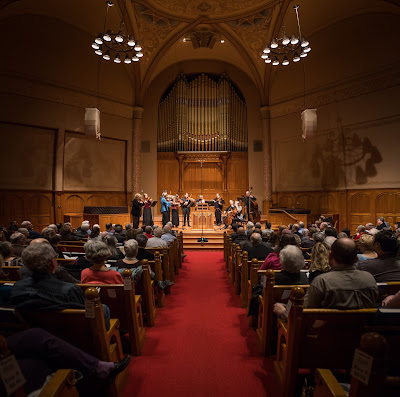 First, a disclaimer: I am not an instrumentalist unless, as one of my teachers reminded me, my voice is an instrument. But I've played piano and organ, and even cello. In college, I had to take private violin lessons because the required string methods classes clashed with my practice teaching schedule. (I have to admit that that semester of violin lessons taught me more about correct intonation than I'd ever learned from voice lessons and from singing in various choirs from the age of nine.) Yet I love listening to instruments play, in both solo and ensemble settings.

In more than choir I have sung in, the director has admonished us, especially when we were performing a joyous work, to let the audience know by our facial expressions and even bodily movements the joy we were experiencing as singers of great music. On Friday (November 18) at First Baptist Church, I watched as the ensemble players in the Portland Baroque Orchestra quite naturally, it seemed, enjoyed the music they were playing. It made an impact upon me, and I daresay upon the audience who heard such gorgeous music as we did. The PBO is anything but a dour group of professionals.

Alexander Weimann, the guest conductor and soloist, is an unabashed professional and played most everything flawlessly in the two Handel organ concerti and in another concerto by C.P.E. Bach. His continuo playing in a Concerto for Bassoon by Capel Bond, another 18th century composer, was first-rate. Weimann also shone brightly in one of Mozart's "Epistle" sonatas for organ and strings and in a sinfonia to one of J. S. Bach's cantatas. The point I wish to make here is that Weimann so obviously enjoys playing this music and bringing it to life for the audience. He pays close attention to it all, and from my vantage-point in the balcony directly above him, I could not help but notice his facial expressions as he got involved with the music. From time to time, he would raise one hand to conduct the ensemble players, sometimes both hands if not at the keyboard – no easy feat, believe me.

It was pertinent that the program opened and closed with Handel organ concertos. It opened with Op. 4, No. 3, HWV 291. Movements from these concertos were often played in between portions of Handel's oratorios or operas. And often entire concertos were offered in that context. One can imagine an 18th century London audience, hearing a premier performance of Handel's latest work, and being treated to a little gem of an organ concerto now and then. It must have made for a long evening, but we have to realize that this was long before the days of electronic reproduction and broadcasting. As Weimann notes in the program, Handel was "reanimating a practice he had used in his early oratorio "Il trionfo del tempo" in 1707, during his Grand Tour to Italy. Later in London, when playing and directing his organ concerti, he had found the perfect forum to excel as composer-performer in one."

No. 3 in Handel's first set of concerti is delightful in every respect. The organ is a solo instrument, rather in the manner of a first player in a group of peers, as Weimann says. It is written in the style very much like an Italian concerto grosso (a group of soloists, often referred to as concertino, pitted against a larger group, the ripieno). The listener readily saw that Handel, like most Baroque composers, freely borrowed from other works, as part of this concerto is identical with a trio sonata of Handel's.

Nate Helgeson, a very tall and young bassoonist, subtly played Capel Bond's concerto. Bond was organist at St Michael and All Angels parish church, that later became Coventry Cathedral. He knew Handel's oratorios well, having directed some of them, and was clearly influenced by Handel's adept use of the bassoon's more lyrical tenor register. Weimann notes, "the galant bassoon concerto in four movements gives us a charming picture of the wider musical scene in England at the time."

As Weimann notes J.S. Bach "had four genius musicians we know of amongst his children [twenty in all]." Everyday life can't have been easy." Carl Philipp Emmanuel Bach, one of his sons, came up with over fifty keyboard concertos, without always being specific about the intended instrument, be it harpsichord, pianoforte, or organ. This work features marvelous cadenzas, well executed by Weimann. The first movement is varied, full of surprises, with tricky keyboard work. There is lively dialogue between violins and organ in the third movement. Throughout are many chromatic passages with contrasting dynamics. C.P.E.'s music is decidedly in the more "Classical" genre than the Baroque and at times, the listener wonders how far the son roamed from the father! But I think Papa would be proud of how his son's music developed, though he died when his son was thirty-six.

J. S. Bach's cantata BWV 35, "Geist und Seele wird verwirret" ("Spirit and Soul become confused," an interesting theological concept), was composed shortly after Bach was in the position of Kantor at Thomaskirche in Leipzig. The two parts of the cantata begin with elegant concerto movements for solo organ, woodwinds and strings. These two movements delight the ear, as do all of Bach's concertos. This particular cantata is written for solo alto voice and orchestra, with the organ prominently heard throughout.

Another Handel work performed Friday, Trio Sonata Op. 2 No. 5, shares an identical Allegro movement with the organ concerto heard earlier in the program. Another part is from an aria from Handel's opera "Rinaldo." Baroque composers always borrowed from themselves (and others), so this should be no surprise. This was performed by two oboes, played by Stephen Bard and Brandon Labadie, with Helgeson returning as bassoonist, and organ.

Wolfgang Amadeus Mozart once said that "The organ … is in my eyes and ears the king of all instruments." He wrote for organ, but not extensively, and what has survived to this day includes seventeen delightful sonatas that were written to provide a respite for the priest between the Kyrie and Gloria and the Gospel in introduce the Epistle reading for a Roman Catholic High Mass. Hence, their moniker "Epistle Sonatas." Weimann and two violins and bass performed one of them, in C Major, KV 336. In these sonatas the organ is not always prominent, but it is in this one and it is utterly delightful.

As noted above, the program closed with the first concerto for organ and orchestra in Handel's Opus 7. In this work, there is plenty of liberty for the soloist to improvise in the first movement, a set of variations on a ground. Before this work was performed, Weimann announced that it would be in an alternate version in three movements, rather than five, as in the printed program. The first movement was a tema ed variazione (theme and variations), the second an adagio with a remarkable "walking bass," and the finale a Bourée.

In Weimann's informative and witty program notes he speaks personally of his fascination since childhood with the church organ. "Its countless pipes, keys, often multiple keyboards, the pedal, sometimes more buttons and switches ... than on the flight deck of a big aircraft; the fact that it challenges the whole body and all available mental skills to master the tricky task of coordinating all limbs … clearly, my attraction to this particular instrument was initially boyish, but it still persists, and today I am very excited to share my passion with you in a program of some of the finest writing for solo organ and orchestra." I am most happy to report that Alexander Weimann delivered! Many in the audience could readily identify with Weimann's passion, including this reviewer.

A nice corollary of the evening was talking with Cliff Fairley, now retired from the Bond Organ Co., the maker of the small three-rank instrument that was used in this performance. Fairley was largely responsible for its crafting and was obviously thrilled to hear his opus used as a solo instrument. He and I sing with the Bach Cantata Choir and this very organ is used as a continuo instrument, but once was featured in a performance of another Handel concerto, "The Cuckoo and the Nightingale," Opus 4, No. 13 of Handel's played by John Vergin.
-----
Post Script: As admitted above, my foray into organ playing once took me down the path of a dare to myself that I would one day play Handel's Organ Concerto, Op. 4, No. 1 in g minor. And, in my fifties, I actually accomplished it! It was a sort of gift to the organist in my parish (I am a cleric) at the time, who was celebrating his 20th anniversary in the post. I gathered together the string quartet from the local high school that included his daughter as the first violinist, and imported his son, an excellent string bass player, to form an "orchestra," really a quintet. I played the organ solo, doing reasonably well, sweating all the while and taking the tempos slower than I'd heard on recordings. But it brought me the greatest joy, so much that I hope for that kind of joy for anyone, involved in music-making or not!
Posted by James Bash at 9:00 PM