And from the Composers Datebook: On this day in 1717, J.S. Bach is allowed to leave the Duke’s Court at Weimar. He had been imprisoned since Nov. 6th by his former employer Duke Wilhelm Ernst of Weimar for accepting a new post at Prince Leopold’s court at Cöthen without first asking permission.
Posted by James Bash at 12:30 AM No comments:

Since “Carmen” is a bullet-proof opera that is often performed in a fanciful, romantic vein, it was refreshing to see Portland Opera present the new interpretation that Denyce Graves designed for this beloved work. If anyone knows “Carmen” inside and out, it is Graves, who is considered one of the greatest in the title role. The Graves-envisioned-production, premiered by Minnesota Opera before travelling to Glimmerglass and then to Portland, put a grittier and darker spin on the tragic story than usual. But infused with the singing and acting of Maya Lahyani as of the free-spirited woman, the performance on November 11 at Keller Auditorium resonated well with the nearly full house, making it a night to remember.
Although Graves was not able to attend the production, Eric Sean Fogel, who assisted her at Minnesota and Glimmerglass, made sure that everything went smoothly. This “Carmen” was updated with a contemporary look, including the Seguidille where Lahyani, clicked little coffee cups (if I saw that correctly) instead of castanets. The pantomime of a man being strangled during the overture strongly foreshadowed Carmen’s death at the end of the opera.

Sets designed by Riccardo Hernandez included a huge door for the cigarette factory that opened vertically into the fly space. The huge, matriarch-like sculpture near the bull-ring seemed a bit out of place, but figuratively seemed to tie the scene to the Romani people.

Mezzo-soprano Lahyani expertly conveyed the sexy and willful title character fluidly – one moment she could be enticingly saucy and the next moment aggressively taunting. Her voice deftly expressed Carmen’s desires with ease, from her enticing tra-la-las to her defiant refusal of Don José.

Making his professional debut, tenor Matthew Pearce turned in a stellar Don José. His high notes had verve and a remarkable sheen that grew with intensity as he became the crazed, jealous lover.

Soprano Ariana Wehr wonderfully captured the purity of Micaëla with a beautiful tone and her interaction with Pearce created a tender moment in opera that has a lot of hard edges.
Richard Ollarsaba cut a dashing figure as Escamillo, all decked out in toreador glitz that was polished by his bass-baritone. The addition of an eyepatch suggested that his days in the ring were numbered, and sure enough, he was brought out in a stretcher all blooded and dead right after Carmen met her end.

Zachary Lenox as El Dancaïro and Matthew Cerillo as El Remendado teamed up with gusto to convey the rough and tumble smugglers. Darren Lekeith Drone had plenty of heft as the platoon commander Zuñiga. Keanon Kyles distinguished himself as the corporal Moralés and Gregory Brumfield as the café owner Lillas Pastia. Judy Yannini’s Frasquita and Cloe Sanatonio’s Mercédès aptly conveyed the lighter side of fortune-telling.

Costumes by Oana Botez gave the Roma women and men colorful outfits, and plain, dark blue uniforms with padded vests to the soldiers. Fight choreographer Jon Armour unleashed an unforgettable scene in which complete mayhem breaks out at the end of Act I.

Dance sequences by Madison Hertel, Gemma Isaacson, and Michael Francis McBride swirled about, adding spice and miraculously didn’t hit anyone when the stage was crowded.

Although Keller Auditorium was not sold out, it was very full, and I heard that the other two performances also drew large audiences. That bodes well for Portland Opera – especially in taking on a “Carmen” production that was not in the traditional style.

Baroque bout! - Reviews of the three candidates for PBO's artistic helm - in OAW 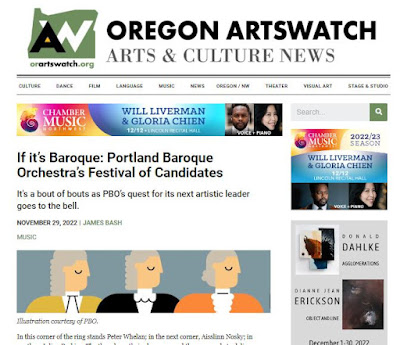 My reviews of the concerts that will help to determine the next artistic leader of the Portland Baroque Orchestra is now posted on Oregon ArtsWatch here.  I have to admit that it was fun to write up!
Posted by James Bash at 1:54 PM No comments: 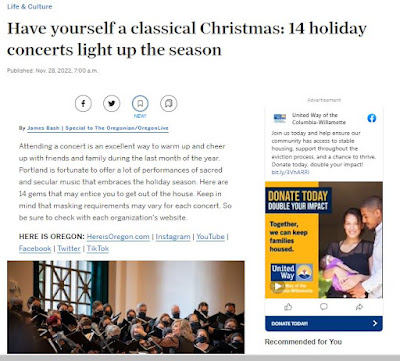 I wrote up a number of recommended concerts for The Oregonian. They are available online here and will appear in the printed edition of the paper on Friday.
Posted by James Bash at 8:33 AM No comments: