Composer Bob Priest pointed out to me that Portland now has seven groups devoted to new music:

I that's a pretty impressive list.
Posted by James Bash at 6:43 PM No comments: 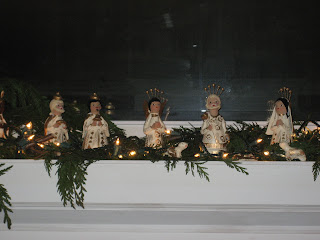 Bachxing Day returns! This year marks the fourth anniversary of Classical Revolution PDX's winter tradition of Bachxing Day, a musical celebration of the man and his music (on December 26th, Boxing Day.) No, there's no literal connection, but if you want to find out more about it, read our conversation here at OMN.

As a sidenote, I will be playing at Bachxing Day this year; on the mandolin a bouree from one of the cello suites and the top voice of one of the two-part inventions (however I will try to get someone else to play the other voice on another instrument) along with a prelude from another one of the cello suites but on the piano...yep, Bachxing Day is that kind of show.
Posted by Lorin Wilkerson at 10:34 AM No comments:

I hate it in the Oregonian, when they run the words "Does not repeat" at the top of James McQuillen's reviews. I don't see why these words need to be printed. When a reporter writes a review of a basketball game or some other sporting event, it is not prefaced with the words "Does not repeat." I would rather see these few words removed and the space be given to McQuillen's review. If these words need to be printed, then they should appear in regular type at the end of McQuillen's review.
Posted by James Bash at 12:12 PM No comments:

It was on this day in 1892 that the Nutcracker ballet premiered at the Maryinsky Theater in St. Petersburg, Russia.

It was a collaboration among three men: Ivan Alexandrovich Vsevolojsky, the director of Russia's Imperial Theater; choreographer Marius Petipa; and composer Peter Ilyich Tchaikovsky. Petipa and Tchaikovsky had recently teamed up to produce a ballet adaptation of The Sleeping Beauty, and it had been so successful that Vsevolojsky wanted them to collaborate again.

When The Nutcracker finally opened to the public, on this night in 1892, the initial reviews were not very favorable. One critic wrote: "For dancers there is rather little in it, for art absolutely nothing, and for the artistic fate of our ballet, one more step downward."

But Tchaikovsky's score has become a beloved part of the holiday season, with songs like "Waltz of the Flowers," "Dance of the Sugar Plum Fairy," and "Russian Dance." And The Nutcracker has gone on to become the most often-performed ballet of all time — hundreds of professional and amateur ballet companies in communities around the world are putting it on right now. The famous English ballet critic Richard Buckle opened his 1972 review of the ballet: "Well, we are one more Nutcracker nearer death."
Posted by James Bash at 1:56 PM No comments:

This afternoon, I'll be singing in a choir concert to raise money for Portland Neighborhood House. The concert features the choir of First Immanuel Lutheran Church and St. Luke Lutheran. The program includes John Rutter's "Gloria" accompanied by professional brass and percussion players. Dan Hibbet and Ralph Nelson share the conducting duties. There's no admission charge, but all donations will go to the Neighborhood House, which has programs to feed the hungry, house the homeless, and educate young and old. The concert takes place at 4 pm at St. Luke (6835 SW 46th Avenue, Portland). I'll be singing a solo in one of the numbers that the choirs sing. The concert also has a sing along section; so bring your voice!
Posted by James Bash at 9:36 AM No comments:

It looks like Portland is not the only city that has thumbed its nose at its own orchestra. According to this report, the Toledo city council voted down a request to give the Toledo Symphony $10,000 to help defray the cost of travelling to Carnegie Hall to play in the Spring for Music festival next May. Earlier this year, the Oregon Symphony sought $20,000 from for its trip to the same festival but was turned away by the Portland City Counci.

I don't know about Toledo, but in Oregon, I've never seen Mayor Sam Adams or any of the city commissioners at an Oregon Symphony concert. Maybe they will show up when the orchestra plays at Carnegie Hall in May.
Posted by James Bash at 12:58 PM 1 comment:

Milton coined more than 600 words, including the adjectives dreary, flowery, jubilant, satanic, saintly, terrific, ethereal, sublime, impassive, unprincipled, dismissive, and feverish; as well as the nouns fragrance, adventurer, anarchy, and many more.
Posted by James Bash at 12:51 PM No comments:

The Oregon Symphony's facebook page mentioned that the orchestra's performances of Handel's Messiah on the 18th and 19th are close to selling out. Maybe this is due to the all-star Canadian soloists who will be featured in the production... or perhaps the conductor, Jean-Marie Zeitouni, who is also a Canadian.
Posted by James Bash at 12:08 PM No comments:

Peggy Swafford, former OSO violist and indefatigable champion of music education, has set up a project through the Music Education Assistance Project (a program of Local 99, American Federation of Musicians) to provide $25,000 to get much needed instruments for instrumental music instructors in the Portland Public Schools. The programs are chosen by popular vote on Pepsi’s Refresh Everything website, which allows for people to set up projects online and use social media to rally people to their cause. This is one case where the need is dire – please click over to Peggy’s project page and get her closer to her worth goal of providing Portland children with a musical education. You can vote more than once, so keep clicking and spread the word!
Posted by James Bash at 10:50 AM No comments: