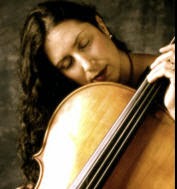 It is with sadness that I have to make note of the death of Lori Presthus, the Portland-based cellist who was a member of the Portland Baroque Orchestra. She passed away on November 20 at age 57. According to this obituary, she had a re-occurrence of cancer. In addition to her expertise with the cello, Presthus excelled in painting and jewelry making. I had the pleasure of interviewing her and writing it up for Oregon Music News. Presthus was a remarkable person, and she will be missed in the Portland community.
Posted by James Bash at 2:46 PM 4 comments:

Carlos Kalmar talks about conducting and much more 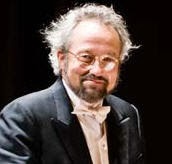 Posted by James Bash at 5:51 PM No comments: 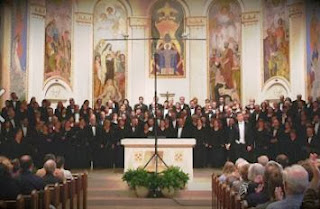 The Portland Symphonic Choir served up large helpings of sonic warmth at its Wintersong! concert on Saturday evening (December 14) at St. Mary’s Cathedral.  Embracing the holiday music of many cultures, the choir’s program offered a sumptuous spread of choral pieces from all over the globe and, to top that off, many of its members wore ethnically-garnished dress.
Guest songwriter, pianist, and vocalist Naomi LaViolette started the concert with her gorgeous arrangement of Noel. After introducing the melody while playing the piano, the 100-plus members of the choir seamlessly slipped into the stream of music and gradually split it into parts. With a generous burst of volume the piece reached a glorious climax with the words “Noel, born is the king of Israel.” That was a wonderful opener, and it would be interesting to hear another collaboration between LaViolette and the choir in the near future.
Steven Zopfi’s arrangement of “Many and Great, O God Are Thy Things” was impressively sung by the women of the choir. They enveloped the audience in a very smooth and strong melody that in a unison “ooo” that was simply beautiful.  After a while the sound split into alto and soprano voices and some of the text was “Great Spirit, show us the way, show us the path of peace.”
Under Zopfi, the choir sang two arrangements by Elliot Levine. “Al Hanisim,” invoked Hanukkah, and featured underlying repetitive line that the choir propelled faster and faster so that the prayerful text became more urgent and real. The second piece “Lo V’chayil” (“Not by might”) used a much slower tempo and tones in a lower range to create a serious and affirmative mood. Soprano Carley Kassab and tenor Brian Haskins distinguished themselves with exposed solos near the end of the piece.
Zopfi also led the choir in spirited performance of “Gloria A Dios” (“Glory to God”) by Michael Mendoza, who, in addition to his composing activities, is the Director of Choral Activities at The College of New Jersey. Gloria A Dios” is a brief piece in five sections for choir, soloists, and a small chamber ensemble, and the music is joyful and almost bouncy at times. Tenor David Foley sang with terrific presence in the quartet that included excellent contributions from soprano Gail D’Aloiso, mezzo Rachel Portnoy-Bradley, and bass Jim Imhoff.
Guided by Kathryn Lehmann, the choir delivered Paul Christiansen’s lively arrangement of “Jeg er saa glad” (“I am so glad”) with élan.  The verses in which the women delved into embellishments while the men sang the melody evoked the image of ice skating on a Scandinavian lake. The singing of “Lo How a Rose E’er Blooming, in a setting that Swedish composer Jan Sandström based on music by Michael Praetorius , went in the opposite direction, using humming and closely related notes to create a thick, foggy carpet of sound from which emerged the glowing melodic line.
Lehmann also conducted the choir in “The Seven  Joys of Chirstmas” by Kirke Mechem, which included a medley of familiar carols from England, France, Germany, and Spain, plus a New Year Song from Japan. The music was beautiful, but the text got a bit muddied, and “Fum, fum, fum!” could have used a faster tempo. Denise Fujikawa provided outstanding accompaniment on the harp.
As part of the Wintersong tradition, the Portland Symphonic  Choir invites a Portland metro high school choir to participate in the concert. This year’s invitee was the Grant High School Royal Blues, a 32-voice chamber ensemble that has maintained a high standard over many years as one of Oregon’s best high school. Under its new director, John Eisemann, the ensemble sounded very good, giving lovely performances of “Shchedrik” (the Ukrainian carol of the bells), “Wexford Carol” (an Irish carol), “Ukuthula,” (traditional South African song), and “I am But a Small Voice” (by Roger Whittaker in a arrangement by John Coates Jr.), which included hand gestures that symbolized the text.
Interspersed with the featured pieces were four carols: “O come All Ye Faithful,” “Hark! The Hearld Angels Sing,” “Joy to the World,” and “Silent Night.” Members of the audience were encouraged to sing along, and they got a terrific jump start by members of the choir, who surrounded them for the first couple of verses of each selection. The concert ended with the PSC and the Royal Blues singing  the “Hallelujah” form Handel’s “Messiah,” a sure fire way to get everyone up and applauding with smiles before heading out into the chilly December air.
Posted by James Bash at 11:13 AM No comments: 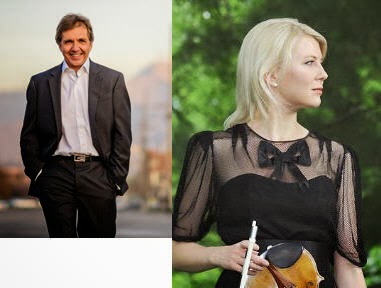 Posted by James Bash at 5:36 PM No comments:

The Minnesota Orchestra was nominated to the best orchestral recording category for the 2014 Grammys.

Here are the nominees for all of the Classical categories: