In conjunction with the Viola da Gamba Society of America's annual conclave, which is being held this year at Pacific University in Forest Grove, a free concert will take place tonight, July 29th, at the Taylor Meade Performance Arts Center in McCready Hall at 730 pm. In addition to the Portland Viol Consort, performing a set entitled "The Humors of Mr. Dowland" (featuring his Lachrimaes), Parthenia and Friends and Hallifax and Jeffery will also perform.

Information, including maps and driving directions, can be found at the VdGSA's website here.
Posted by Lorin Wilkerson at 8:51 AM No comments:

Bob Kingston's opera blog, dramma per musica, is up and running again. It will be great to read his observations once more. Huzzah!
Posted by James Bash at 1:11 PM 1 comment:

and from the Writer's Almanac:
It was on this day in 1829 that William Burt received a patent for the "typographer." It was a typewriter that looked more like a record player. It had a swinging arm that picked up ink and then printed a letter, and then the paper was manually adjusted to make space for the next letter.
Posted by James Bash at 1:38 PM No comments:

The Grove Dictionary of American Music

I'll be contributing three articles to the The Grove Dictionary of American Music, 2nd Edition. This new edition will serve as a comprehensive update to the original 1986 edition (eds. H. Wiley Hitchcock and Stanley Sadie). The second edition will be published as part of Grove Music Online and as an eight-volume print publication. I'll contribute articles on Helmuth Rilling, the Oregon Bach Festival, and Arvo Pärt. The pay for these articles is not sumptuous, but it will be fun to be published by the Oxford University Press.

I was contacted about the possibility of writing for The Grove Dictionary of American Music because of my membership with the Music Critics Association of North America. Some critics eschew membership in this organization, but it has been very beneficial to my writing.
Posted by James Bash at 9:28 PM 3 comments:

www.youtube.com/theodorepresser#p/a/u/1/qskPkyxO3AA
Posted by James Bash at 1:43 PM No comments: 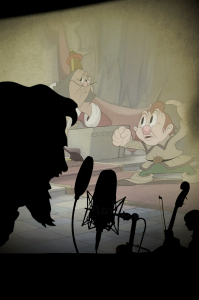 Regular readers of this blog will know that I'm a huge fan of Huckins' work with his ingenious Filmusik project. I can't recommend it highly enough for music, film, and theater nuts, or anyone who just wants to have a great time seeing something really original. This should be a brilliant bit of fun, with or without the kids along. I will be reviewing this show on Friday July 23rd.

Following is a press release from Filmusik:

This summer Filmusik is turning a local movie theatre into a Hollywood Soundstage. A team of 30 Portland professionals from the field of movie soundtracks create the sound for a classic animation live in the pit. As the movie plays on the big screen, 4 cartoon actors give voice to the on-screen characters, sound effects artists create the noises from over a hundred foley props and the Filmusik Chamber ensemble performs the music from the film including many musical numbers and several sing-a-longs. For cartoon buffs, family, new music lovers and anyone who's ever wanted to know how they make that funny noise when Daffy Duck falls over. Filmusik: Gulliver's Travels is a new way to experience movies and sound. Incidentally, it's also the only place in town where you can sing along to a bouncing ball with a live orchestra and chorus backing you up!

Tickets and more information available at www.filmusik.com
Also at the Hollywood Theatre box office at 4122 NE Sandy Boulevard
Or by calling (503) 281-4215

Oregon has always been particularly gifted when it comes to cartoon voice-over actors. Mel Blanc, graduate of Lincoln High School was the most widely recognized voice actor in the world, the voice of Bugs Bunny, Daffy Duck, Porky Pig and hundreds of others. Filmusik: Gulliver's Travels features 4 contemporary Portland talents: James Dineen, Todd Tolces, Chris Porter and Bill Barry. They have their hands full dubbing this cartoon with a cast of colorful singing Lilliputians. The voice-overs are directed by Sam A. Mowry, long time radio actor and Filmusik collaborator

“For the voice actor, everyone of us, it started when we watched the Saturday morning cartoons. We copied the voices, learned what made an exciting vocal choice or dynamic characters. Even before we knew thats what we learned. I’ve been lucky enough to work on some original animation projects and we have Todd Tolces, one of Will Vinton’s stalwarts during their heyday. Using your voice to add that final sparkle to such an amazing film is really quite magical. Recreating these classic cartoon legends with fidelity to the original, but being your own man, or king or giant for that matter is a dream come true for all of us. This is going to be amazing.”
- Sam A. Mowry – Voice-over Director

David Ian and his team of film Foley artists create the sound effects live. Tapping shoes together for footsteps, rattling doorknobs and crinkling cellophane. The props are flying as they keep time with the movie, matching every rattle, whistle and explosion.


"As a long time fan of the Fleischer Bros. work, it's a thrill for me to be able to work with this wonderful animation.
It's also a delight to be able to gently update some of the SFX while preserving that "vintage sound" that is so much part of the experience."
- Marc Rose - Sound Designer

The originally composed score by Galen Huckins draws on elements from the musical-toon era of the film with a more contemporary sensibility. The ensemble features strings, piano, clarinets and an arsenal of percussion.

"Music from animation tends to be very fast paced, the characters move with a musical rhythm of their own that the score adapts and transforms to its own purposes. It sounds a little schizophrenic played by itself, but its a lot of fun to perform.
- Galen Huckins - Composer

Fleischer's animated feature from 1939 tells Jonathon Swift’s travel adventure in a Betty Boop meets Moby Dick sort of way. There’s songs and dance, live sound effects, live voices and live music. It’s like Fantasia if Mickey Mouse were Goliath and the orchestra was right in your lap! With an original score performed live by the Filmusik Chamber ensemble and a cast of 20 performers. GULLIVER'S TRAVELS is a movie experience not to miss. It's a rare chance to see professional soundtrack artists at work. Get yourself some popcorn and be prepared to sing along!!
Posted by Lorin Wilkerson at 1:30 PM No comments:

From the New Music Box:
On July 11, 1922, German conductor Alfred Hertz lead the Los Angeles Philharmonic in the first concert performed at the Hollywood Bowl, an open-air auditorium built in a natural canyon.

From the Writer's Almanac:
Fifty years ago today, Harper Lee's (books by this author) only novel, To Kill a Mockingbird,was published, the story narrated by six-year-old Scout Finch in the fictional town of Maycomb, Alabama. It was an immediate best-seller, a Pulitzer Prize winner, and an instant American classic. It continues to sell incredibly well, with 30 million copies still in print.

The book's title appears in a scene in chapter 10, where Scout remembers something her dad, Atticus, has said and asks her neighbor Miss Maudie about it.

"I'd rather you shot at tin cans in the back yard, but I know you'll go after birds. Shoot all the bluejays you want, if you can hit 'em, but remember it's a sin to kill a mockingbird." That was the only time I ever heard Atticus say it was a sin to do something, and I asked Miss Maudie about it.

One of Portland's best young singers, mezzo-soprano Tuesday Rupp, will soon travel East to attend the Institute of Sacred Music/Yale Divinity School. This is a two year program that will result in a Master of Arts in Religion with a music concentration. If you would like to hear Rupp one more time before she leaves, she will be singing with The Julians vocal ensemble at Great Hall Restaurant (1406 SW Broadway) at 8 pm on July 16th.

PS: According to the Oregon Bach Festival program, James Taylor, who sang the tenor solos in last night's brilliant performance of Mendelssohn's "Elijah," is an associated professor of voice and adviser to the Program in Voice: Early Music, Oratorio, and Chamber Ensemble for the Institute of Sacred Music at Yale School of Music.
Posted by James Bash at 2:51 PM No comments:

Congratulations are in order for multi-talented Stephen Marc Beaudoin, who is the new interim managing director of PHAME Academy. SMB has a posting about this on his blog here.
Posted by James Bash at 12:36 PM 1 comment:

Musical America cites reports from the German press that Kent Nagano is resigning early from the Bayerishe Staatsoper. Here's the jist from MA:

German press is reporting that Kent Nagano will step down as music director of the Bayerische Staatsoper. His contract expires in 2013. He has been in the job since 2006 and last extended his contract in April of 2009.

According to the South German newspaper Süddeutschen Zeitung, Nagano will leave because of "cultural and political developments in Munich over the last month."

The move has left the media baffled. One report claims that Nagano is leaving because of clashes with Intendant Nikolaus Bachler. Another claims that the conductor doesn’t like the Strauss-Mozart-Wagner repertoire and therefore the Staastsintendant Wolfgang Heubisch had to make a decision to fire him in order to begin his summer "Politpause" (legislative/administrative break) with a clear head, ready for the fall.

All seem to be questioning the Bavarian government's competence in the move, since Nagano has such a strong track record and has been doing well in the job.

The Guardian has filed this report: Mikhail Pletnev charged with child molestation in Thailand.
Posted by James Bash at 10:54 AM No comments:

Readers of this blog should know that I'm not the author of pdxclassical, the twitter feed. I write for this blog and for Oregon Music News and some print publications, and I own up to my reviews.

PS: I have received emails asking about this matter.
Posted by James Bash at 10:08 AM No comments:

Conductor and pianist Jeffrey Kahane has withdrawn from the Oregon Bach Festival because of illness. He was replaced by Robert Levin for last evening's recital with Thomas Quasthoff (review to come on Oregon Music News). For tomorrow night's gala, the Festival will engage Nicholas McGegan He will conduct the Poulenc two piano concerto, Mozart Sinfonia, and the two Quasthoff show tunes. More later on Oregon Music News.
Posted by James Bash at 10:42 PM No comments: