Preview of new concerto by Salvador Brotons in The Columbian

In today's edition of The Columbian, you can read my preview of Salvador Brotons' new Double Concerto for Violin, Cello, and Orchestra.  It will be played by the Vancouver Symphony where Brotons is the music director this weekend (Saturday and Sunday), featuring concertmaster Eva Richey and principal cellist Dieter Ratzlaf.
Posted by James Bash at 9:24 AM No comments:

On May 30, 1923, 26-year-old composer and conductor Howard Hanson, who would later be one of the founders of the American Music Center, led the world premiere performance of his Nordic Symphony, the first of his seven symphonies and still one of his best-known works, in Rome during his residence as first holder of the American Rome Prize.
Posted by James Bash at 1:00 AM No comments:

from the Composers Datebook:

On this day in 1913, Stravinsky's "Le Sacre du printemps" (The Rite of Spring) received its premiere performance in Paris, by Diaghilev's Ballet Russe, Pierre Monteux conducting.
Posted by James Bash at 1:00 AM No comments:

On May 28, 1957, after several discussions, the National Academy of Recording Arts & Sciences, Inc. (NARAS) was born at a meeting at Hollywood's legendary Brown Derby Restaurant.
Posted by James Bash at 1:00 AM No comments:

Oregon Symphony closes the season with a Titanic Mahler and Weill

The Oregon Symphony closed the 2018-19 season with a Mahler Symphony, as has been the tradition for some years. In addition there was a special presentation of Kurt Weill's ballet chanté (sung ballet) The Seven Deadly Sins, his final collaboration with lyricist Bertolt Brecht, which tells the story of Anna 1 and Anna 2,  two sisters (or are there really two of them?) on a journey (in this English translation) across the U.S., with seven cities each representing one of the sins.

Portland-based chanteuse Storm Large took center stage for the Weill. A stool and a small table with a wine bottle and glass formed the set, and in the prologue Storm's easy, confident performance found good footing with the slow, steady pulse of the orchestra. Hudson Shad, a male vocal ensemble, sang the part of The Family, which played the role of a Greek Chorus commenting on the action.

During Sloth, Hudson Shad sang the menacing call and response, and the vocalists were tremendous. Storm sang with immaculate diction, and during Pride she showed an unabashed, frowzy sensuality as she stripped off her greatcoat and danced in a slinky cocktail dress.  Her performance was dynamic and believable--one couldn't help but root for her all the way. During Anger Storm sang a lengthy, repetitive pedal point that was absolutely concise, clear and bell-like. Gluttony featured a delicious a cappella chorus from Hudson Shad, who with their oh-so-serious moralizing reinforced the satirical nature of the work. The vocalizing from the entire group, but especially from Storm Large, was extremely powerful while never sacrificing exacting clarity.  This performance was a treat, and the wealth of experience the vocalists have performing this specific work shone brightly.

Mahler's Symphony No. 1 in D Major, "Titan" opened with the orchestra taking a mythic tone indeed, cyclopean and trembling strings leading into the ghostly off-stage fanfare. Maestro Kalmar is wonderful at immense, broad soundscapes, and he led the orchestra effectively from the opening threnody to the dizzying pastorale.  The zesty, rumbling rum-pum-pum from the strings in the second movement was fantastic, betraying the somnolent, stygian  Frère Jacques that opens the third. The orchestra found its way into the jarringly joyous dance tune, and as the two themes went back and forth they were never allowed to grow stale: always morphing dynamically or texturally, growing now more sparing, now more longing.  The startling, horrifying triple forte in the fourth movement was a shock even though most people (probably) knew it was coming. Was Mahler intentionally channeling Haydn's great moment from the 'Surprise Symphony here? Maybe. It certainly had a similar effect on the audience.

A piece like this, made for a large, lush, modern orchestra, should be played deftly, subtlely, and yet with appropriate emotionality and bombast when required. It's very immensity requires that each small part do its job; there is little margin for error here precisely because of its grandeur. Having been on the other side of Maestro Kalmar's baton numerous times, I can attest that his bold, often frenetic gesturing belies a meticulous rigidity that holds together the tremendous musical forces that can so easily go astray. As usual it was a pleasure to watch the maestro lead such a tremendous group of performers, and it was a fittingly stupendous finale.


Posted by Lorin Wilkerson at 2:37 PM No comments:

On May 26, 1953, Aaron Copland appeared before the Committee on Un-American Activities (HUAC) of the U.S. House of Representative.

On this day in 1944, Arturo Toscanini conducts the combined NBC Symphony and New York Philharmonic in a benefit concert of music by Wagner, Verdi, and Sousa at the old Madison Square Garden. The concert raised $100,000 for the Red Cross. During an intermission auction, New York mayor Fiorello LaGuardia auctioned off Toscanini's baton for $10,000.
Posted by James Bash at 1:00 AM No comments:

On May 21, 1893, in an lengthy article published in the New York Herald titled "Real Value of Negro Melodies," Bohemian composer Antonin Dvorak, during his three-year sojourn in the United States, prognosticated that the future of American music should be based on "negro melodies" and announced that the National Conservatory of Music, where he was serving as Director at the time, would be "thrown open free of charge to the negro race." It was to be the first of a total of seven articles in the Herald in which Dvorak expounded these ideas which provoked comments ranging from incredulity to denunciation by composers and performers around the world including Anton Bruckner, Anton Rubinstein and John Knowles Paine.
Posted by James Bash at 1:00 AM No comments:

On this day in 1886, the American premiere of J.S. Bach's Mass in B minor (11 selections) was given during the May Festival in Cincinnati, conducted by Theodore Thomas. The next documented performance (12 sections) was given in Boston on February 27, 1887, by the Handel and Haydn Society, with Carl Zerrahn conducting a chorus of 432 and an orchestra of 50. In both the 1886 Cincinnati and 1887 Boston performances, the famous 19-century German soprano Lilli Lehmann appeared as one of the soprano soloists. The first complete performance of the work was apparently given either at the Moravian Church in Bethlehem on Mar 17, 1900, by the Bach Choir under J. Fred Wolf, or at Carnegie Hall in new York on April 5, 1900, by the Oratorio Society, Frank Damrosch conducting.
Posted by James Bash at 1:00 AM No comments:

On May 17, 1846, Belgian-born instrument builder and clarinetist Adolphe Sax patents the saxophone, an instrument that would have a profound impact on American jazz. Over a century later, on May 17, 1957, a computer was used to make music for the first time.
Posted by James Bash at 1:00 AM No comments:

On May 16, 1907, Miller Reese Hutchison filed an application at the U.S. Patent Office for his invention, the motor-driven Diaphragm Actuated Horn and Resonator, for use in automobiles. The patent was granted on May 3, 1910. The carhorn would later be used as a musical instrument by numerous composers ranging from George Gershwin in An American in Paris (1928) to Wendy Mae Chambers who developed a Car Horn Organ in 1983.
Posted by James Bash at 12:01 AM No comments:

My review of the Oregon Symphony's Peer Gynt concert has been published in the Classical Voice North America here. I hope that you enjoy reading it. 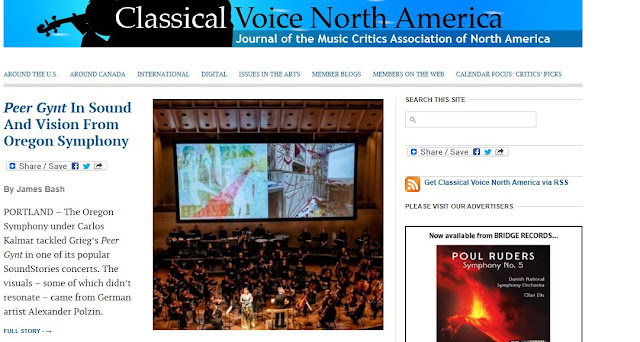 and from The New Music Box:

On May 15, 1972, the Concord Quartet premiered George Rochberg's String Quartet No. 3 at Alice Tully Hall in New York City. Rochberg, an established serialist composer, shocked the compositional scene by returning to tonality in this composition. Many cite this premiere as the birth of neo-romanticism.

On this day in 1875, the American premiere of J.S. Bach's "Magnificat" took place during the May Festival in Cincinnati, conducted by Theodore Thomas. The Cincinnati Commercial review of May 14 was not favorable: "The work is difficult in the extreme and most of the chorus abounds with rambling sub-divisions. We considering the ‘Magnifcat' the weakest thing the chorus has undertaken . . . possessing no dramatic character and incapable of conveying the magnitude of the labor that has been expended upon its inconsequential intricacies. If mediocrity is a mistake, the ‘Magnifcat' is the one error of the Festival". Thomas also conducted the next documented performance in Boston on Mar. 1, 1876 (for which composer John Knowles Paine performed as organ accompanist to a chorus of 300).
Posted by James Bash at 1:00 AM No comments:

and from The New Music Box:

On May 10, 1987, David Lang, Michael Gordon and Julia Wolfe produced the first-ever Bang on a Can Marathon, a twelve-hour concert at the SoHo gallery Exit Art combining music by Milton Babbitt, Steve Reich, John Cage, George Crumb, Lois V Vierk, Lee Hyla, Aaron Kernis, Phill Niblock and others.
Posted by James Bash at 1:00 AM No comments:


and from The New Music Box:
On May 7, 1946, Tokyo Telecommunications Engineering is founded with about 20 employees. The company, later renamed Sony, would eventually invent the home video tape recorder, the Walkman and the Discman, as well as take-over Columbia Records, later CBS Records, which under the leadership of composer Goodard Lieberson (1956-1973) released numerous recordings of music by American composers.

and from the Composers Datebook: On this day in 1824, Beethoven's Symphony No. 9 ("Choral") was premiered at the Kärntnertor Theater in Vienna, with the deaf composer on stage beating time, but with the performers instructed to follow the cues of Beethoven's assistant conductor, Michael Umlauf.
Posted by James Bash at 1:00 AM No comments:

On May 5, 1891, Walter Damrosch led the New York Philharmonic in the very first concert in the large auditorium at Carnegie Hall, now called Stern Auditorium. The program consisted entirely of European repertoire: Beethoven’s "Leonore Overture No. 3," Berlioz’s "Te Deum," Peter Ilyich Tchaikovsky "Festival Coronation March" (with the composer making a guest appearance on the podium), the hymn "The Old One Hundred" and "My Country 'Tis of Thee" (then America's unofficial national anthem although the tune is that of the British anthem "God Save The Queen").

This was not actually the first concert in the building, however. On April 1, Liszt-pupil Franz Rummel had already given an all-European solo piano recital in the space that now holds Zankel Hall. The oldest known program for the third of Carnegie's stages, what is now called Weill Recital Hall, a chamber music concert produced by the Society for Ethical Culture, dates back to October 31, 1891 and included the song "At Twilight" by the American composer Ethelbert Nevin.

On May 3, 1943, William Schumann received the very first Pulitzer Prize for Music for his Secular Cantata No. 2 - A Free Song, a work published by G. Schirmer and premiered by the Harvard Glee Club, the Radcliffe Choral Society, and the Boston Symphony Orchestra under the direction of Serge Koussevitzky on March 26, 1943.
and from the Composers Datebook:

On this day in 1971, debut broadcast of National Public Radio's "All Things Considered" was made with an electronic theme by composer Don Voegeli of the University of Wisconsin (In 1974, Voegeli composed a new electronic ATC theme, the now-familiar signature tune of the program).
Posted by James Bash at 1:00 AM No comments: