Alfredo Casella (1883-1947)Maureen Forrester (1930-2010)andEric Hoffer (1898-1983)Elias Canetti (1905-1994)and from The Writer's Almanac:It was on this day in 1788 that Wolfgang Amadeus Mozart entered into his catalog the completion of one of his most beloved works, Symphony Number 40 in G Minor (sometimes called “The Great G Minor Symphony”). It was written in the final years of Mozart’s life, when things were not going well. An infant daughter had died a few weeks earlier, he had moved into a cheaper apartment, and he was begging friends and acquaintances for loans. But in the summer of 1788, he wrote his last three symphonies: Symphony Number 39 in E-Flat, Symphony in G Minor, and the Jupiter symphony. It is not known for sure whether Mozart ever heard any of these symphonies performed.
Posted by James Bash at 1:00 AM No comments: 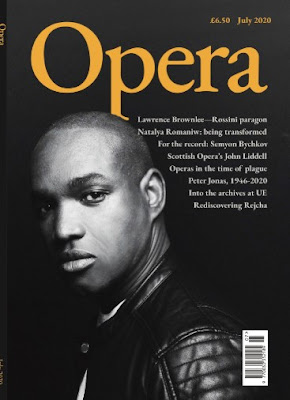 I forgot to report that my review of Portland Opera's production ("An American Quartet") appeared in Opera magazine's July issue. Those were the last performances (back in February) that the company did before the Covid19 virus put the kibosh on performing arts companies everywhere.
Posted by James Bash at 4:18 PM No comments:

Marion Anderson - the famous singer and known to many as the aunt of former Oregon Symphony music director James DePreist - was flooded by water pipes that burst. You can read more about it and the effort to raise funds to restore things (the house is now a museum and headquarters of the Marion Anderson Historical Society) in this account in the South Philly News.
Posted by James Bash at 1:30 AM No comments: