While attending the Oregon Bach Festival, I purchased a bobble head version of Helmuth Rilling, music director of the festival. It looks like this: 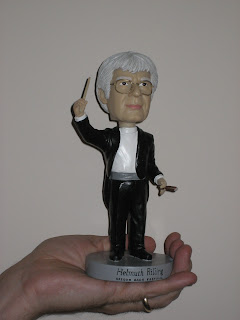 Rilling and the the festival leadership must have a good sense of humor. He has a baton in one hand and a cigar in the other!

On the serious side, the OBF just reported a gross sales of $420,000 at the box office, which represents a growth of 16% over the previous year. Overall, the festival goers added an estimated $6 million to Eugene's economy through sightseeing, hotels, meals, and shopping (including sales of the bobble-headed Rilling). This report is not yet posted in the press release area of the OBF's web site, but it should be soon.
Posted by James Bash at 6:58 PM