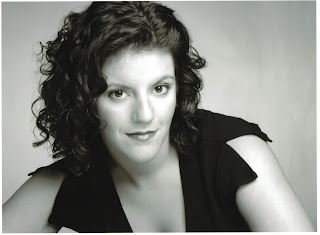 Portland Opera is reaching way back into the past to bring something new to Portland, mounting a production of “La Calisto” a Venetian-Baroque opera that was written by Francesco Cavalli in 1651. For this production, Portland Opera is collaborating with Portland Baroque Orchestra to create an ensemble of 17th Century instrument specialists, including cornetto virtuoso Bruce Dickey who is based in Venice, Italy, to give you a real Baroque experience.

How long have you been studying for your part in La Calisto?

Apostolou: I started studying La Calisto during The Turn of the Screw; so it was the middle of January. That wasn’t an ideal situation, because all of the Studio Opera singers have had a very busy season.

What is the vocal range for your part in this opera?

Apostolou: The top is a high B-flat, and it’s an ornament. It’s not written in the score. Middle Cs are the lowest notes. That’s usually not where my voice likes to live, but I love singing this work. It has a speech-like quality to it.

Apostolou: She goes through quite a change in the opera. First of all she is daughter of King Lykaon who served Jove a meal of human flesh. So Calisto ran away from her family and became a follower of the Diana, the goddess of the hunt.

Calisto is very strong willed but very naïve. She is a chaste follower of Diana, but then she meets Jove and everything gets turned on its head. She can’t tell the difference between the real Diana and the Jove-Diana, and they treat her in polar opposite ways. Then Jove’s wife, Juno, finds out what’s going on, and Calisto doesn’t realize who she is and spills the beans, and gets turned into a bear. Such is the way of the gods.

This opera has comedy and tragedy in it. Do you prefer one over the other?

Tell us more about the demands of this opera.

Apostolou: Baroque is not necessarily a different way of singing, but a different mind-set. Robert Ainsley, our conductor, has been a tremendous help. He is an absolute expert in this style of music. He has taught us how to learn the music. In Mozart and Handel, there’s a lot of give and take. Baroque doesn’t allow for you to play with the notes on the page. But you don’t have to. Monteverdi, Cavalli, and their contemporaries wrote the rhythms exactly how they wanted the speech to sound. So you can play with the tempi, but the music just sings itself. When you try it, you find that it does really work that way.

The Venetian-Baroque style has a lot of recitative. I have more arias than most of the characters in La Calisto. But it’s not like the way we normally think of arias, not like Mozart or even Handel. This opera is very speech driven. You don’t use ten measures to sing a sentence, you sing it in three. So the plot is constantly being pushed along.

My character has small moments of reflection, and it’s usually before something big happens. My last aria is about a page and a half of repose, taking everything that has been going on and processing it, and that’s when Juno comes in with the furies and turns me into a bear.

You won the Met competition in Oregon and did pretty well at the regional in Seattle as well. Congratulations!

Apostolou: Thanks! I won the encouragement award in Seattle, and it was a lot of fun. It was on my birthday, too. The singing there was amazing. We just went out there and did our best.

Are you planning to enter more competitions?

Apostolou: Yes, I plan to do more, like the Giulio Gari competition in New York City in May. Competitions can be a good way to get your name out there. Being a finalist helps to make people take notice.

After you appear in Portland Opera’s Rigoletto, your time with the Studio Artists program comes to an end. So what are your next steps?

Apostolou: This summer, I’ll sing in two productions at the Green Mountain Opera festival in Vermont. I’m Barbarina in Nozze de Figaro and Andina in the Elixir of Love.

How did you choose to become an opera singer? Did you grow up singing a lot?

Apostolou: I started off dancing. I was a very energetic child. My parents enrolled me in dance class. I loved it and got into theater doing dance and musicals. Everybody did choir. The public schools in New Jersey had a very strong music program. Then I went to high school, a private school, and they took all everyone involved in the music program to see the dress rehearsals at the Met. That’s when I fell in love with opera and became obsessed with it. The Magic Flute was the first opera that I had ever seen – I was just 14 - and I came back home and told my parents that I was going to become and opera singer. And they said, okay! Go ahead and try and see what happens. I applied to music schools and went to Carnegie Mellon in Pittsburgh, they have an excellent drama and music programs in the country. Then I got my masters from the Manhattan School of Music.

I was a Central City Opera for two summers and in the outreach program at Tulsa Opera before coming to Portland.

Apostolou: (Laughs) Yes, we just keep pressing on. After Vermont, I’m moving to New York and will audition and see what happens.

Good luck with everything!

Apostolou: Thanks! See you at the opera!
Posted by James Bash at 12:58 PM