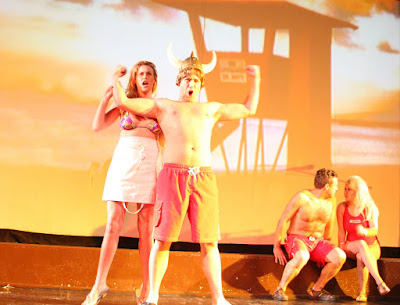 On Wednesday night at the Clinton Street Theater in SE Portland, Opera Theater Oregon debuted what must surely be the world premier of any Wagner opera to be set as an episode of the once-popular, vapid TV series Baywatch. Das Rheingold may not seem at first like a suitable thematic partner for a show whose main claim to fame was a horde of buxom young women and bronzed, muscled men running around the beach (often in slow motion) rescuing people, preventing crime, and solving mysteries, but glimpse underneath the surface dissimilarities and a surprising mesh occurs.

The production was impressive considering all the work needing to be done by director Katie Taylor, at the helm of a scrappy young company like OTO. The score was arranged by musical director Erica Melton, and consisted of two ensembles: an orchestra with piano, harp, clarinets and brass (provided by Festival Brass), and in lieu of strings (and some of the winds) was a small army of electric guitars (the Electric Opera Company) and percussionists off to the right of the stage, in addition to live foley artists. 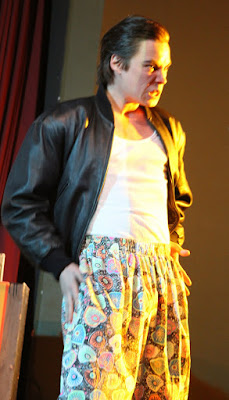 Baritone Michael Miersma had the leading role as Larry 'Loomin' Large (Alberich the Dwarf,) who determines that the only way to gain the glory and power that rightfully belongs to him is to come into possession of the perfect tan, which stood in for the Ring. He was great fun to watch; he brought with him the boldness and brash confidence that have marked his past roles, qualities that served this farce well because anything less than over-the-top would not have been enough. His madman histrionics, communicated through strong facial acting, were beyond the pale, absolutely hysterical.

The singing as a whole was remarkably well-done; Benjamin Bell's Wotan (Mitch (David Hasselhoff)), David Simmons' Matt Brody (Loge) and Emily Kinkley as Freia (CJ Parker (Pamela Anderson)) all acquitted themselves admirably from a vocal standpoint in these demanding roles, as did the chorus and those singing supporting roles.

The dialogue was ridiculous, much like the TV show. Sample: 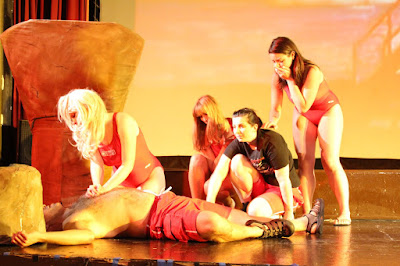 I can't say I'm familiar enough with Baywatch to know whether that was lifted directly from the script, but it makes its point. In all it was a riot, the Baywatch theme serving as a clever vehicle with which to roast the self-importance of Wagnerian opera. The orchestral reduction was sensitively done; surprisingly it felt like there wasn't much missing from a harmonic or textural standpoint. The fuzzy, wailing, Baywatch theme that kept recurring from the electric guitars, as well as the quotation of MC Hammer's 'Can't Touch This' are more examples of the cornball antics that Taylor fearlessly employed.

The production runs through February 28th at the Clinton Street Theater, and is preceded by Leitmotif Bingo 30 minutes before the beginning of each show. Scaled back quite a bit from the lengthy original, it's another example of Portland's avant-garde, alternative classical music scene, and perhaps the only thing in the world that could bring hardcore Baywatch and Wagner fans together--at long last.
Posted by Lorin Wilkerson at 11:00 AM

We are going to see it on Wednesday!