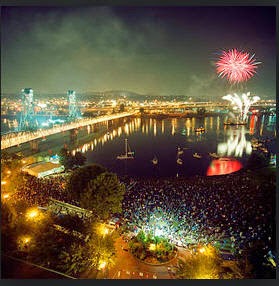 From the Oregon Symphony press release:

Oregon Symphony Music Director Carlos Kalmar and President/CEO Scott Showalter this week revealed details about the upcoming August 28 Waterfront Concert that highlight the event’s spectacular return. Those details paint a vastly expanded Waterfront Concert that includes a new start time of 2:30 pm rather than the traditional 5:00 pm along with an entertainment lineup that spotlights many of the City’s other musical organizations.

“It’s going to be something very special,” Kalmar said. “We have so many great musical groups here in Portland, including some who are doing the important work of training our next generation of musicians. It will be a pleasure to share the stage with them for the Waterfront audience.”
Featured groups include Portland Opera, Oregon Ballet Theatre, Portland Youth Philharmonic, Metropolitan Youth Symphony, 234th Army Band of the Oregon National Guard, Hillsboro School District Mariachi Una Voz, BRAVO Youth Orchestras, and Portland Taiko.
Showalter acknowledged the special partnership that the arts enjoy with the city of Portland. “Mayor Charlie Hales and all of the City Commissioners have our great thanks for funding the return of the Waterfront Concert—one of the state’s largest community concerts. With these resources, we were able to turn the 18th Waterfront Concert into a truly city-wide celebration with many other arts organizations.”
“Nancy and I are fans,” Mayor Hales said. “This is one of those great events that make Portland so cool.”
Special thanks also go to the Waterfront Concert’s other generous sponsors:  NW Natural, Boeing, KINK FM and KATU-TV.
Waterfront Concert
Thursday, August 28, 2014
(rain date if necessary: Friday, August 29)
Tom McCall Waterfront Park
1020 Naito Pkwy
Free to the public!
2:30 – 3:00 pm               234th Army Band of the Oregon National Guard
3:30 – 4:00 pm               Metropolitan Youth Symphony
4:00 – 4:30 pm               Hillsboro School District Mariachi Una Voz with Edna
Vazquez
4:30 – 4:50 pm               BRAVO Youth Orchestras
5:15 – 6:00 pm               Portland Youth Philharmonic
6:00 – 6:30 pm               Portland Taiko
7:00 pm                            Oregon Symphony
(with selections from Oregon Ballet Theatre and Portland Opera)
Nightfall                          Fireworks
The Oregon Symphony’s program includes an Oregon Ballet Theatre performance of the Grand Pas De Deux from George Balanchine’s The Nutcracker featuring principal dancers Haiyan Wu and Chauncey Parsons as well as a selection from Bizet’s Carmen with baritone Alexander Elliott to highlight Portland Opera’s upcoming 50th anniversary season.
The festivities conclude with the traditional grand finale—Tchaikovsky’s 1812 Overture complete with military cannons from the Oregon Army National Guard 218th Field Artillery.  Immediately following the 1812 Overture the skies will light up with an elaborate fireworks display, a signal to everyone in Portland that the musical season has begun.
With an expected audience of around 15,000 in Tom McCall Waterfront Park, patrons who bring lawn chairs are asked to bring only chairs that sit low to the ground in order to preserve sightlines for patrons behind them.

Complete program details as well as information on all the participating organizations will be available on the Symphony’s website:  www.OrSymphony.org/waterfront.
Posted by James Bash at 10:27 PM