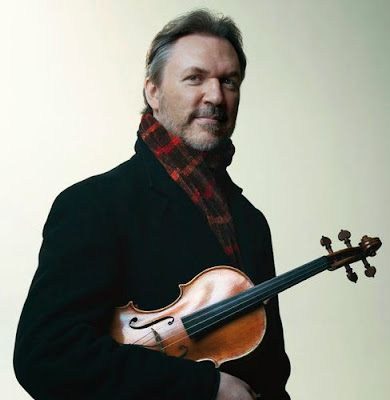 Grammy-award-winning violinist Mark O’Connor made Portland his final destination for his annual Appalachian Christmas tour and thrilled a fairly full house at the Arlene Schnitzer Concert Hall on December 22nd with his virtuosic playing. For people like this reviewer, who know O’Connor primarily through his “Appalachia Waltz” hit (which he made with Yo Yo Ma and Edgar Meyer), but don’t follow his circuit through the year, the concert, presented by All Classical FM (KQAC), was a bit of a mixed bag. The main thing was the sheer genius of O’Connor’s fiddling, which shifted effortlessly between folk, jazz, bluegrass, and something slightly classical. It’s sheer genius, even when amplified (as were all of the instruments in this concert). All of the numbers on the program were done with a bit of Appalachian-inflected twang, but it seemed strange that a couple of traditional Appalachian Christmas tunes like “Go Tell It on the Mountain” and “I Wonder as Wander” were missing from the program.

O’Connor didn’t do everything by himself. He performed with a tight-knit ensemble that included violinists Maggie O’Connor (who is also his wife) and Carrie Rodriguez, banjo player Cia Cherryholmes, mandolinist Forrest O’Connor (who is Mark O’Connor’s son), guitarist Joe Smart, and bassist Michael Rinne. Rodgriguez, Cherryholms, and Forrest O’Connor also sang several of the pieces.

Starting with an upbeat arrangement of “Jingle Bells,” the listeners got an excellent sense of the improvisational talent of O’Connor and his clan. Rodriguez provided evocative and energetic vocals for “Winter Wonderland,” “Blue Christmas,” “The Christmas Song,” and “Jingle Bell Rock.” Cherryholmes used a belting bluegrass style for her solos, but her voice became strident and piercing at times, which especially didn’t work well for “Away in a Manger.” Forrest O’Connor’s soft baritone worked well in “Ol’ Blue.”

The highlight of the evening occurred when Mark O’Connor gave a solo improvisation based on “God Rest Ye Merry Gentlemen.” His jazz phrasing reminded me of some Stephane Grappelli-like licks but he did all sorts of other fiddling that included subtle nuances between tones (mircro-tones) and an inspired passage in which his thumbs and fingers drummed on side of the violin. His playing brought down the house.

Twangy renditions of “Sleigh Ride” and “Jesu Joy of Man’s Desiring” went down well, but O'Connor's Appalachian arrangement of the “Carol of the Bells" didn’t have any bell-like quality at all. Still, this concert was a smashing success for the spellbound audience. A thunderous standing ovation brought the musicians back out on the stage for a foot-stomping, bluegrass inspired “Joy to the World.”
Posted by James Bash at 5:53 PM