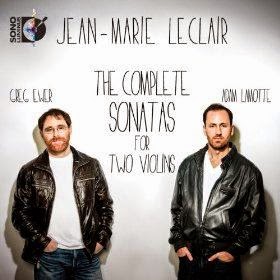 If you are fond of pure violin music (that is, without accompaniment of any sort), then you should listen to the music of Jean-Marie Leclair in “The Complete Sonatas for Two Violins” in a recording that was released last year under the Sono Luminus label. You’ll hear two of the Northwest’s top violinists, Greg Ewer and Adam LaMotte, perform Leclair’s sonatas so superbly that you’d think they were same person. Their playing exhibits incredibly matched timing, excellent tonal balance, and elegant dynamics – all of which combine to bring out the sinewy textures and subtle colors of Leclair’s sonatas in this 2-CD set. Together, Ewer and LaMotte make a strong case for the Leclair’s music, which has been quietly residing in the dust bin for quite some time.

It turns out that Jean-Marie Leclair (1697-1764) was a French violinist-composer, who wrote sonatas and concertos in which Italian models (Corelli in particular) were gracefully Frenchified a la the ballet music of Jean-Baptiste Lully. Leclair’s mastery of the violin was considered to be of the highest level, and he was especially noted for his command of double stops (a technique that flavors the duo violin sonatas). Matthais Maute, in the CD’s liner notes, mentions that Leclairs “duos influenced later composers such as Mozart, de Beriot, Viotti, and closer to our own time, Bartok and Berio.”

The recording of Leclair’s sonatas for two violins by Ewer and LaMotte fills in a gap that has been ignored for a long time. Hopefully, they will find another recording project soon.
Posted by James Bash at 11:11 AM