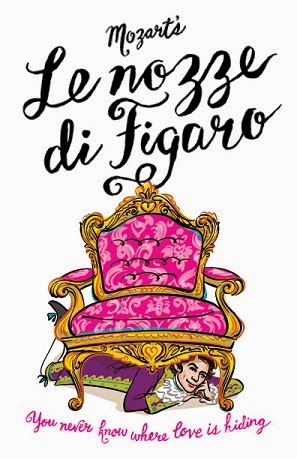 Portland State University opened its 2015 opera, Mozart's Le Nozze di Figaro, on Friday, April 17 at the Lincoln Hall on the PSU campus. A marvelous venue since it's renovation in 2010, it was a perfect showcase for this beloved work.

PSU has long been known for its spectacular student operas, and this year's was no different. The orchestra under Ari Pelto hit the ground running with the famous overture, its tempo brisk and lines clean. The set was traditional, set in the late 1700s and included a sweeping colonnade that served as a backdrop for many scenes, including a dimly lit, mystical garden in the second half. The costumes were rich and detailed, providing another important element for an evening that felt like one had moved back in time to Herr Mozart's day.

Hannah Consenz's Susanna was spectacular--fine singing, clear, concise diction, and a seeming intuition for the demands of the soubrette were hallmarks of her performance. The opening scene with her and Darian Hutchinson as Figaro left no doubt that the PSU opera group was up to the task.

Hutchinson was an affable Figaro and he too sang beautifully. There was charisma and chemistry between him and his affianced, and throughout the performance Hutchinson's portrayal of a Figaro with effortless confidence imparted to the audience his belief that no matter what the circumstance, things would turn out all right for Figaro.

Jonathan Roberts as Bartolo and Hanaa El-warari as Marcellina were also enjoyable; Roberts has a clean, easily-projecting baritone. Anna Patterson's Cherubino was a special treat, not just for the knack for physical comedy she displayed, but also for some nuanced singing.

Alexandra Saori Erickson's Countess Almaviva was extremely impressive. Erickson has a very powerful voice; in some instances it pushed being too powerful. As a listener I would've traded some heft for a more delicate touch in her first aria, but by the time she sang E Susanna, non vien she had settled in and delivered a rich, inviting aria, vocally balanced and emotionally true. Of special note too were her duets with Consenz; they blended two very different vocal types seamlessly, and the end result was delicious to hear.

In all the performance displayed the traits that audiences have come to expect from PSU's opera program under the hand of Christine Meadows; that is to say professionalism, poise and an outstanding final product.
Posted by Lorin Wilkerson at 12:47 PM