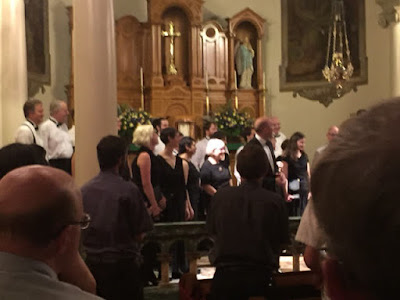 “Hot weather doth not deter a fine choir nor doth it deter a large and devoted audience.” That was one of the main takeaways from the performance of Cantores in Ecclesia on August 20th at The Church of Saint Patrick for the final concert of the William Byrd Festival. The outdoor temperature had reached over 100 degrees that afternoon, and the sanctuary was toasty warm – defying the efforts of a couple of large floor fans to make the confines cooler. So it was no surprise when the men of the choir took their positions without their tuxedo jackets, but it was a bit of odd to see conductor Mark Williams bounce up in front of them in full regalia. Well, he is British, after all, so he is as cool as a cucumber.

And, believe it or not, Williams directed the concert with élan. With an array of gestures that included pointing index fingers, arcing arm movements, quick cutoffs, and fluttering hands, Williams coaxed a gorgeous sound from the 30-voice ensemble, which responded with a superb performance of works by William Byrd, Richard Dering, Thomas Weelkes, Thomas Tomkins, and Orlando Gibbons. Williams also gave the choir a break by playing two pieces on the positiv organ, a nifty mobile pipe organ built by Portland’s own Bond Pipe Organs.

The concert began with a robust rendition of Byrd’s “Sing joyfully.” The choir excelled with excellent diction, blend, and exciting dynamic surges that mirrored the words perfectly, such as the sudden crescendo with the words “sing loud” and “blow the trumpet.” The choir then pivoted expertly to the next piece, using no vibrato and perfectly matched vowels to sing Byrd’s “Domine, secundum actum meum” with its penitential and solemn text (“Lord, do not judge me according to my deeds”).

Showing his superb talent at the keyboard, Williams made Byrd’s “Fantasia in C major” flutter like a bird. His nimble fingers deftly played the many tricky and swift ornamentations, gracing the audience with a sonic smile. That piece was followed by the “Factum est silentium” of Dering, which related St. Michael’s battle with a dragon from the book of Revelation. The choristers delivered a smashingly dramatic account of Dering’s music, and the multilayered “Alleluia” at the end was heavenly.

Byrd’s “Haec dicit Dominus” (“Thus says the Lord”) conveyed a soothing message from the book of Jeremiah in which God promised to bring the Israelites back to their homeland. The singers traversed the shifting tonalities of that piece with ease, and concluded the first half of the program with a rousing “Hosanna to the Son of David” by Weelkes.

The second half of the program brought more of the same high quality singing, starting with three pieces by Byrd. His “Exsurge, quare obdormis” was a lively setting of a passage from Psalm 44 where suffering people accuse God of sleeping and forgetting about them. Next came “Aspice Domine” (“Look down, Lord”) with its soaring lines for the sopranos and finally “Defecit in dolore vita mea” (“My life has wasted away in pain”), which was sung by the altos, tenors, and basses.

Williams turned to the positive organ to perform Gibbons “Fantasia in A minor,” which, though more subdued than Byrd’s fantasia, was lovely. Afterwards, the choir sang a joyous “O Lord, arise,” which Weelkes based on two Psalms of praise. The mood then went in the opposite direction with Tomkins’s “When David heard,” an anguish-ridden retelling of David’s lamentations over the death of his son Absalom (from 2 Samuel). The concert finished on an upbeat note with an energetic “O clap your hands” by Gibbons.
Posted by James Bash at 12:10 PM