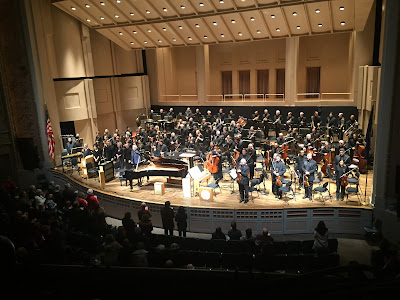 For the second of its SoundSights concerts, the Oregon Symphony uncorked an intense performance of Olivier Messiaen’s “Turangalîla-Symphonie” on Monday (December 5) at the Arlene Schnitzer Concert Hall. One could hardly expect anything less after seeing the stage packed with musicians, a vast array of percussion instruments along the back left wall, a grand piano and an ondes martenot arranged in the front. The concert probably marked the premiere Portland appearance of the ondes martenot, a piano-like electronic instrument that can make sliding glissandos and other unusual sounds that are rarely heard live. Yet as part of its SoundSights presentation, the concert also featured special video animation created by Rose Bond and the Pacific Northwest College of Art to accompany the music. The undertaking of such a task was admirable, but in the imagery was mostly a distraction from the music which had plenty going on to engage the senses.

Inspired by the legend of Tristan and Isolde, Messiaen wrote “Turangalîla” as expression of various aspects of love – carnal, passionate, idealistic, tender, romantic, you-name-it – and death. Its ten movements take almost 80 minutes, and the Oregon Symphony with pianist Steven Osborne and ondes martenot specialist Cynthia Millar collaborated marvelously under the baton of Music Director Carlos Kalmar to deliver the myriad of sonic textures with integrity. But the softest passages were covered unfortunately by the sound of the video projector, which was positioned at the lip of the balcony.

Osborne’s fearless and impeccable playing of knuckle-crunching notes that often cascaded down the keyboard was one of the many highlights of the performance. Millar deftly added tones from the ondes martenot, but it was indeed strange to hear the high-pitched whistling sounds. The trombones and tuba created an imposing presence with the “Statue” theme. The trumpets hit dizzying high notes spot on. Oddly enticing woodwind combinations drifted in and out. The strings created a lush background when they were not zigging and zagging across the musical landscape (Nancy Ives even broke a string on her cello). The percussion battery made the most of gongs, cymbals, drums, chimes, woodblocks, xylophones, triangles, and other beatable items.

The video animation tried to match the tempo of the music. When things got faster, the imagery increased. When the tempo slowed down, so did the pace of images. The colors scheme started with white and gradually moved to vibrant colors at the end of the piece. The images of nuts, bolts, and screws seemed way out of context, but the plant-tendril silhouettes were appealing, and at the end of the piece there was a riot of colors. I found myself closing my eyes at times so that I could hear the music more closely. For me, the visual aspect didn’t enhance the music, but it seemed that the audience, in general, enjoyed the two together. The grandest impression I was left with at the end of the piece was the shimmering sound of the cymbals during the fire-alarm-level of forte in the final measures. That was one of the loudest finales I have ever heard anywhere.

Because “Turangalîla” draws on the legend of Tistan and Isolde, it was highly appropriate for the concert to open with the “Prelude and Liebestod” from Richard Wagner’s opera “Tristan und Isolde.” The unhurried pace and slowly building tension was just delicious to the ears. The woodwinds excelled with their contributions (special kudos to Todd Kuhns, bass clarinet) as did the horns. Now if Kalmar and company could only have more strings to add to the rich and beautiful sound!
Posted by James Bash at 2:39 PM