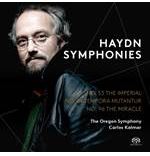 The Oregon Symphony today announced that its upcoming CD – the fourth under the musical direction of Carlos Kalmar – is set for a local release today and an official international release on April 7.

This latest CD, entitled Haydn Symphonies, follows Spirit of the American Range (2015) which was nominated for a Grammy Award for Best Orchestral Performance; This England (2012); and Music for a Time of War (2011), which garnered two Grammy Award nominations for Best Orchestral Performance and Best Engineered album. This latest CD, like its three predecessors, was recorded in hybrid multichannel Super Audio CD format for Pentatone. This recording brings the total number of recordings by the Oregon Symphony to 20.
The new CD features three symphonies by Franz Joseph Haydn: Symphony No. 53 (The Imperial), Symphony No. 64 (Tempora Mutantur), and Symphony No. 96 (The Miracle). It was recorded live at the Arlene Schnitzer Concert Hall in 2013 (Symphony No. 64) and 2016 (Symphonies Nos. 53 and 96) by Sound Mirror recording engineers John Newton and Blanton Alspaugh, both of whom engineered the three previous CDs.
Music Director Carlos Kalmar said, “It is my great pleasure to share our newest recording with classical music lovers all over the world. I believe our orchestra is consistently proving it has something important to say musically. We appreciate our relationship with Pentatone and their partners at Sound Mirror who do such a great job of recording us live. We are already at work on our next recording.”
“We are very excited about this new release,” Pentatone’s Vice-President for Artist and Repertoire Renaud Loranger said. “It further documents the relationship between the Oregon Symphony and its music director, Carlos Kalmar, in performances beaming with vitality and stylistic acumen, and will no doubt become another milestone of our collaboration.”

Haydn Symphonies will receive its first radio broadcast on Portland’s own 24/7 classical music station, All Classical Portland (89.9 FM and streaming internationally at allclassical.org), at 7 pm today, March 23.
The recording was made possible in part through a generous gift from Cliff and Karen Deveney and by the James DePreist Fund for Broadcast and Recording.
Following its local release today, Haydn Symphonies will be available for purchase at the Symphony Ticket Office (909 SW Washington) or at the Pentatone website (pentatonemusic.com) until its official international release on April 7, 2017, when it will become available at most music outlets.
HAYDN SYMPHONIES
Haydn: Symphony No. 53 in D Major (The Imperial)
Haydn: Symphony No. 64 in A Major (Tempora Mutantur)
Haydn: Symphony No. 96 in D Major (The Miracle)
Posted by James Bash at 11:52 PM