Playing the piano quietly and with intense emotion and depth, Alexander Toradze had the audience at Skyview Concert Hall on Sunday evening (November 5) so focused on every note that you could have heard a pin drop. That happened while Toradze performed Scarlatti’s Sonata No 32 in D minor in honor of the victims of the massacre that had happened earlier in the day at a church in Texas. The impromptu gesture from Toradze struck a chord with listeners, and it was followed by his brilliant playing of Prokofiev’s Third Piano Concerto.

Toradze’s mastery of the Prokofiev allowed him to sculpt each tone so that the piece sounded totally new and unique. His playing was ingeniously filled with all sorts of nuances. He would lean into a series of notes or sometimes even one note in a way that made a phrase sound more interesting. On the big screen, it was fun to watch his hands move together up and down the keyboard. Using his incredible artistry, he found something deeper in the music and brought it out. His accellerandos were lightning fast and the lyrical passages were golden.

The audience responded with thunderous applause and the orchestra joined in enthusiastically. Toradze didn’t want to take all of it for himself; so after he went backstage he put his arm around music director Salvador Brotons and dragged him to the front of the stage. Then Toradze decided to give an encore, the pulsating and exciting “Precipitato” from Prokofiev’s Piano Sonata No. 7. That electrified the audience once again and more applause erupted from all over the hall.

The orchestra led off the second half of the program with a fine performance of the Divertimento from Stravinsky’s ballet “The Fairy’s Kiss.” Individual members of the orchestra negotiated the tricky passages very well. The principal trombonist and the principal horn player, in particular, gave standout performances, and the principals in the strings and woodwinds had several shining moments as well. Highlights in the fourth movement included a lovely clarinet, cello, and harp combination and the solo by principal flutist Rachel Rencher.

The Suite from Stravinsky’s ballet “The Firebird” also received an outstanding performance from the orchestra. From the ominous sounds of King Kaschei and his cohorts to the majestic glory of the magical Firebird and the final triumphant dance of the prince and princess, the orchestra wonderfully recreated the storyline of the ballet. The playing of principal oboist Alan Jurza was particularly evocative, and the woodwinds and strings, in general, were excellent throughout the piece. Brotons conducted the entire piece from memory, which was an outstanding accomplishment in itself. There are few conductors anywhere who would attempt such a thing, because Stravinsky loved to change meters all over the place.

The concert began with the “Dance of the Persian Slaves” from Mussorgsky’s opera “Khovantschina.” Kris Klavik played the English horn especially well, which may have helped the orchestra to develop a lush and full sound that embraced the lightly exotic music. I noticed that Brotons had rearranged the cellos and violas with the cellos on the outside. We will see if he keeps this arrangement in future concerts.

I spoke with Toradze during intermission, and he asked me to let readers know that he was very upset with the massacre of churchgoers in Texas. He could not fathom how such an event could happen, and the tragic event caused him to ask Brotons if he could play something before the Prokofiev Concerto began. He was very appreciative of Brotons’s willingness to let him do that. The photo at the beginning of this review was given to me by pianist and VSO board member Dimitri Zhgenti, who studied with Toradze. The following photo is also from Zhgenti, showing his students, who came to the performance on Saturday afternoon. 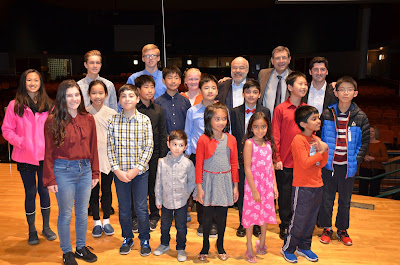 This was indeed a stellar concert! The control, clarity, musical nuances, tone production and joy produced by Maestro Toradze
was the finest we've heard from any keyboard artist here in Vancouver, WA. Maestro Broton's impeccable partnership and "accompanying" with the orchestra matched every detail. What a joy to experience. To another future concert with both artists. Don't miss the next one!