San Francisco Opera’s revival of its Ring Cycle got off to a rousing start with a top notch performance of “Das Rheingold” at the War Memorial Opera House on June12. The production featured outstanding performances from top to bottom by an exceptional cast and new video projections that were even better than the ones used back in 2011 when the Cycle, directed by Francesca Zambello, received its premiere. The wonderfully nuanced singing and acting by the principals and stellar playing from the orchestra, conducted by Donald Runnicles, made this “Rheingold” a memorable occasion.

An impressive array of singers anchored the production, starting with Greer Grimsley’s formidable and powerful presence as Wotan. His full-throttle performance was equaled by Falk Struckmann, who in his San Francisco Opera debut struck fear into the hearts of the Nibelung slaves as the unrelentingly driven Alberich. Śtefan Margita created a smart and cynical Loge, who helped Wotan to capture Alberich, yet refused to join the gods and drink champagne as they walked up the rainbow bridge to Valhalla. 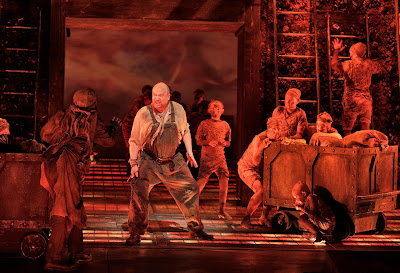 Jamie Barton, as Fricka, pleaded passionately with Wotan to save her kinswoman Freia (Julie Adams) instead of giving her to the giants as payment for constructing Valhalla. Wearing Ivy-League-inspired sport jackets, Brian Mulligan’s Donner and Brandon Jovanovich’s Froh blustered about in a futile attempt to counter Fasolt (Andrea Silvestrelli) and Fafner (Raymond Aceto) who made a terrific entry by setting on an iron beam that was lowered from the ceiling.

Silvestrelli and Aceto enhanced their characters’ camaraderie with humorous gestures that caused chuckles to erupt from the audience. That Freia falls in love with Fasolt was effective but odd. Ronnita Miller’s Erda warned Wotan with firm conviction. David Cangelosi cowered convincingly as Mime, the tormented brother of Alberich.

The three Rheinmaidens (Stacey Tappan, Lauren McNeese, and Renée Tatum) taunted and teased Alberich mercilessly in clouds of dry ice that billowed about the stage. After the gods made their exit to Valhalla, they appeared in dirty clothing and bewailed their fate for having lost the Rheingold.

A massive rock wall of wavy gold stretched across the width of the stage and from top to bottom as well, representing the mines of the Nibelung. Tall ladders were propped against the wall, and minions of Nibelung slaves scurried about in rags, lifting sacks of gold into mining cars. A slippery toad caused laughter to erupt from all corners of the hall. The scene in which Wotan used his spear to remove the ring from Alberich’s finger was gruesomely effective. Donner summoned the bridge to Valhalla with a double-headed hammer that emitted an impressive shower of electrical sparks. The gods ascended the bridge that obviously suggested their entering the Titanic. It would only be a matter of time before their world would sink to the bottom.

Vivid new projections S. Katy Tucker in the opening scene showered the stage with icy-blue waterfalls. They enhanced the original projections by Jan Hartley, the best sequence of which depicted the narrow and twisty passage that descending through a cavern into the mines of the Niebelung.

The projections and scenery combined well with the story to suggest the environmental degradation of the planet in face of those who care only for money and power, but that statement didn’t slap you in the face. That was one of the best things about this production, it had strong values yet never preachy. Hats off to Zambello and company.
Posted by James Bash at 2:06 PM