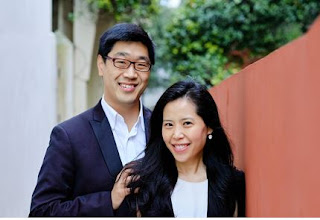 Chamber Music Northwest is pleased to announce that it has selected Gloria Chien and Soovin Kim as its next artistic directors to succeed current Artistic Director David Shifrin after his final Summer Festival in 2020! A husband and wife team, both are internationally-renowned performers – Gloria a pianist, Soovin a violinist – and experienced music presenters. Gloria and Soovin are co-artistic directors of the Lake Champlain Chamber Music Festival, founded by Soovin in 2008. Gloria is also the artistic director of the String Theory chamber music series in Chattanooga, TN – which she founded in 2009 – and has been director of the Chamber Music Institute of the Music@Menlo Festival since 2010.

“Under David’s leadership, Chamber Music Northwest has become one of the most important American chamber music institutions” says Soovin Kim. “Chamber Music Northwest’s vibrancy is closely tied to the artistic values of the Portland community. Gloria and I relish the idea of accepting the baton of leadership from David and nurturing those values while injecting a new energy and fresh perspective that will transform Portland well into the 21st century.”