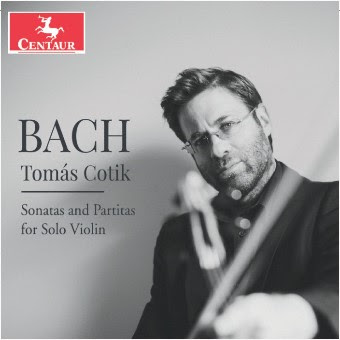 J. S. Bach wrote three sonatas and three partitas for solo violin that are described by scholars and musicians as one of the supreme achievements in the violin repertoire. They require virtuosic technique and artistry that test a player’s ability to manage both quick passagework and also long, flowing lines. Because Bach didn’t specify dynamics, the sonatas and partitas are open to interpretation, and there are many recordings that feature baroque violins and modern violins. You’d think that every avenue of these pieces has been explored, but that is not the case. With his latest CD on the Centaur label, Tomás Cotik has explore another route for Bach’s amazing works by using a baroque bow with his modern violin. The result is absolutely marvelous to hear.

Cotik, assistant professor of violin at Portland State University, has detailed many of his thoughts about the various interpretations of Bach’s music in The Strad, the ultimate magazine for serious violinists. But you don’t have to be an expert in order to enjoy his playing of Bach. It is quite spectacular. Cotik excels at playing lightening fast passages with impeccable precision, yet he can stop on a dime and deliver an exquisitely lyrical line. He can caress a legato section, linger ever so slightly over a note, then toss off a run with elegant ease. The mixture of sounds from one movement to the next is thoroughly intoxicating.

Cotik’s playing has been featured on several recordings, and he maintains an active performance schedule. His interpretation of Bach’s sonatas and partitas his newest album in should add a notch to his reputation as a stellar violinist.
Posted by James Bash at 5:03 PM