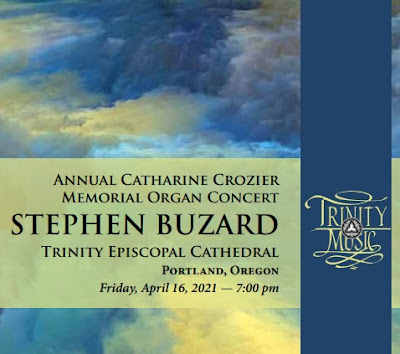 On the evening of Friday, April 16, I walked into Trinity Episcopal Cathedral and experienced my first live-in-person concert since March of 2020. Only 50 or so people were able to obtain tickets; so the large nave (which can seat up to 600 people) looked empty. Still, there was an expectant vibe in the air and the listeners, who wore masks and sat at least six feet from each unless they were a family or group that was on very friendly terms. Concerts programs were not printed, but could be read from a QR code or from an email that had been sent by Trinity Episcopal. The idea behind that, of course, was to reduce any touching whatsoever.

Stephen Buzard, music director of St. James Cathedral in Chicago and one of the most eminent organists in the nation, gave a concert of Twentieth Century music with dance as a celebratory theme. This was Buzard’s first recital in thirteen months, but his wizardly technique on the magnificent Rosales organ was flawless.

I enjoyed the unusual sounds of Jehan Alain’s “Trois Danses.” Alain, a French composer who died in combat during WWII at age 29, was influenced by music of the orient as well the occident. The piece began with bright, rolling phrases that underwent a lot of nuanced changes. Later, slightly repetitive passages transitioned into a loud, swirling section that dissolved into a quiet plaintive cry and dove to the depths of a single low note that sounded like a death rattle before rising in a determined and defiant way.

Buzard played the “Air” and “Toccata” movements from Florence Price’s gentle “Suite for Organ.” Price, an African-American composer whose works have recently been rediscovered, created a contemplative setting that was pleasant and soothing. It acquired an uplifting feeling when a spiritual-like melody snuck in and gradually took over. This the culminated in a grand finale that was filled with joy.

Herbert Howell’s “Psalm-Prelude Set 2, No. 2” also had a meditative and introspective quality. It went from light to dark and back to light again before ending in a subdued and tender way.

The concert impressively kicked off with three selections from Calvin Hampton’s “Five Dances.” The first dance, entitled “The Primitives” captured everyone’s attention with its rollicking and rough-sounding opening. A tromping bass line produced a chaotic yet playful atmosphere that threatened to get out of hand but never did. This was followed by a refined and airy “At the Ballet” and an all-to-brief “Those Americans.”

The program concluded with the “Passacaglia” from Leo Sowerby’s “Symphony in G Major.” Buzard commanded this piece with panache, exploring a series of variations that was just plain fun to hear. The audience responded with a sustained ovation that brought him back to the lectern to announce an encore, a transcription that Buzard made of a memorable improvisation by organist Jeffrey Brillhart at St. Thomas Church in New York City in 2012. It was a fitting conclusion to a concert that will hopefully help us to draw a closing curtain on the pandemic.

Extra credit: I have had my two-doses of Pfizer vaccine. That doesn't ensure me again COVID-19, but it does - with the mask - help.
Posted by James Bash at 6:18 PM