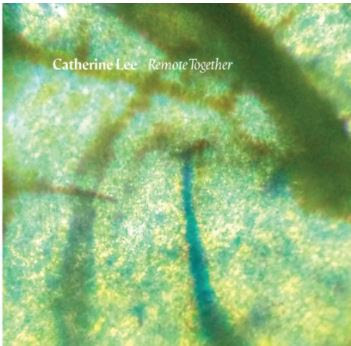 Meditative, contemplative, and set at unhurried pace, the music of oboist Catherine Lee on her latest recording, “Remote Together,” takes listeners on a journey that meshes sounds that you might hear in a recital hall or a studio with sounds from that might come from the forest or the riverside. This album follows an adventurous path, that Lee established with her debut release of “Social Sounds” on the Teal Cree Music label, back in 2013. For readers who are not familiar with Lee, she is a veteran freelancer and teaches at Willamette University, Western Oregon University, and George Fox University.

All of the pieces in “Remote Together” feature composers from Canada and the U.S. who live in the Pacific Northwest. Several numbers were commissioned by Lee, and some were recorded before the pandemic.

Beginning with “Nocturne,” written by Jordan Nobles in 2013, Lee puts us in familiar territory, generating a warm tone on her oboe and a beautiful melody that seems to begin to search for something different. This is followed by Dana Reason’s “Chanson de Fleurs – Eleanor of Aquitaine” (2017), which was inspired by the mediaeval queen who was imprisoned by her husband, King Henry II of England for about 16 years because she supported his overthrow by one of their sons. Reason’s piece has an element of sadness and a firm heartbeat that goes away and then returns after a sonic avalanche occurs, which evokes the image of Eleanor of Aquitaine achieving freedom from prison.

In Taylor Brook’s “Alluvium” (2017), the deeper-sounding oboe d’amore shifts about in microtones, accompanied by a drone of electronics. “Red Eyes, Green Lion’s Teeth, Golden Heads,” created by Julian snow for oboe d’amore and tape in 2017, has sounds vaguely oriental and mysterious. Rounding out the CD is Matt Carlson’s “Chiasmus” (2018), which uses the English horn and synthesizer to evoke an interior monologue and a haunting atmosphere. Lee teamed up with Juniana Lanning to create “Silkys” (2020), which offers intriguing field recordings of real silk moths. The oboe sides between tones and wiggles, perhaps in imitation of a silk worm. Lee also uses extended techniques to produce some unusual sounds that make this listener wonder how she does it.

“Remote Together” is released by RedShift Music and available for purchase on Bandcamp and it’s digital download can be found on CD Baby, iTunes, and Amazon.
Posted by James Bash at 3:34 PM