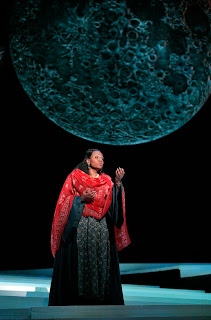 Soprano Lisa Daltirus is staring in the title role of Portland Opera’s "Aida," which opens tonight at Keller Auditorium. Earlier this year, Daltirus did a fantastic performance of "Tosca" with Seattle Opera and will be doing "Aida" with them in August. I talked to her a couple of days ago in order to find out more.

Tell us a little of your background and how you got interested in opera?

Daltirus: My father was an amateur trumpeter and played with jazz bands. My mother loved Broadway musicals. There was always music in the house. I was always sort of performing impromptu. My mother encouraged me to do skits. My mother bought me a piano, and I took lessons at an early age. I was heavily involved in music in my church, which gave me a wide selection of styles from classical to gospel. What intrigued me early on was a production of ‘Amahl and the Night Visitors.’ I was in the chorus and did some dancing. I loved the idea of a production – of putting it all together. I loved the idea of performing. I did know that I would go into opera until high school when I had an epiphany moment. I was more into straight drama. I did a lot plays at the school and did recitation competitions. Then one day it all came together. I loved singing and my voice liked the classical style and I liked acting. So, that meant opera.

Where did you get your training?

Daltirus: At Westminister Choir College in Princeton, New Jersey. I got married right after college and had a couple of kids. So I put my singing career on hold, but kept my training up privately. I did a few competitions and was really fortunate to have some of the right people hear my and recommend to others for performing opportunities. So I went from level to level and all that culminated in my debut at Central Park in 'Tosca.'

I read that you saved the day at the last minute for another soprano.

Daltirus: Yes, I was attending the Richard Tucker Foundation’s gala at Avery Fisher Hall, and I had been attended the gala concert the previous two years. I was also acquainted with the organization through some other smaller concerts they do in New York City. When I entered the lobby I greet them and told them what had been doing. I had just finish an 'Aida' in Delaware. They said, ‘Ok, great. Enjoy the show.’ Then the soprano Aprile Millo sang her first number and had to apologize and excuse herself from the rest of the show because she was ill. The final part of the show was the Triumphal scene from Aida. So the Foundation people came down to my aisle, found me, and asked me if I could do it. So, in that moment I said, ‘God, you opened the door; now you’re going to have to walk me through it.’ Then I just went up on the stage and did it.

How many 'Aidas' have you done?

Daltirus: This will be number seven. It’s one of my favorite roles. I love Verdi. I identify with his heroines. Aida is defiant, and she decides to die with her love. She could’ve run away, but she doesn’t. Her love for Radames wins out.

What draws you to the character of Aida?

Daltirus: I love it that she’s a slave to the Egyptian princess, but she is a princess herself. Amneris can’t figure out what’s so special about this girl, Aida, and why Radames is drawn to her. Why is she regal and different than all the other ones.

The intimate part of the story the orchestration features some light orchestration, but then in a few minutes everything can escalate with trumpets blaring and the orchestra going full tilt. You’ve got to ramp up quickly, and that’s got to be taxing on your voice.

Daltirus: That’s Verdi! He tests your entire range vocally as well as dramatically. It’s all there together – especially in 'Aida.' This particular production has impressed me because both the grand story and the intimate love story will stand out. You’ll get to see all of the emotions and conflicts on stage.

You will be singing 'Aida' again in August with Seattle Opera. What will you do between shows?

Daltirus: I’ll fly home to suburban Philadelphia for a little bit to be with my family and then return to Seattle for the rest of the summer. Later this year I’ll be making my debut with Chicago Lyric Opera in 'Porgy and Bess.' That’s a demanding opera as well.

What other roles are you working on?

Daltirus: I love most things by Verdi. There’s still a lot more for me to explore there. I’ve done 'Il trovatore' and have learned Amelia in 'Un ballo in maschera,' but haven’t performed that one yet. 'La forza del destino' is on my list and so is 'Simon Boccanegra' and 'Don Carlo' that I’m prepared for. I love Puccini and the verismo style. 'Manon Lescaut' is high on my list. So there’s lots to do.

Here's a review that I wrote of Daltirus in Seattle Opera's production of "Tosca" earlier this year.
Posted by James Bash at 10:57 AM