Portland Opera just announced that Clare Burovac is its director of arts administration. According to the press release, Burovac's duties include "the oversight of the Portland Opera Studio program, negotiating artists’ contracts, researching and recommending artists, acting as primary liaison between the Company and its chorus and orchestra, negotiating performance rights, among many other activities."

Burovac has extensive experience in opera management and production, and she has played a big part at Seattle Opera since 1994.

Again from the press release:

"Ms. Burovac, who has 19 years of experience producing and managing opera, received her Bachelor’s degree in violin performance from Bowling Green State University. As a violinist she performed with the Toledo Symphony, Ohio Light Opera Orchestra, and other groups in the Cleveland area, in addition to teaching violin and viola. A recipient of an OPERA America Fellowship in Opera Production in 1993, she has been a guest stage manager for San Francisco Opera, Los Angeles Opera, and Glimmerglass Opera, among many others. She joined Seattle Opera in 1994 as an Assistant Stage Manager, taking on a variety of increasingly demanding positions. Most recently she has been Seattle Opera’s Production Stage Manager and Ring Production Coordinator. She is a member of the American Guild of Musical Artists."

Here's a the press release. Click on it to enlarge. 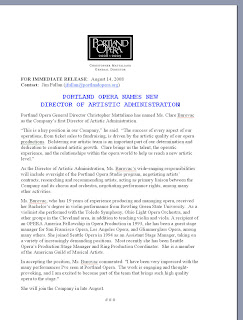