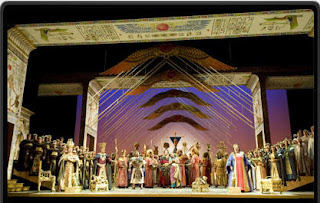 Terrific artistry at all ends of the spectrum helped to create a stellar “Aida” for Seattle Opera on opening night (August 2) at McCaw Hall. The principals, chorus, and orchestra brought a palpable sense of urgency and intimacy to the music and made the tragic love story become vibrant and meaningful. The traditional costumes and scenery placed the action firmly in ancient Egypt and gave a sense of grandeur that made this production a hit from start to finish.

An exceptional cast of principals, led by Lisa Daltirus in the title role, sang with ardor and conviction throughout. Whether soaring to high Cs or diving into the mezzo range, Daltirus blended grace and power wonderfully. Combining her singing with an amazing grasp of facial and body movement, Daltirus became the devoted Ethiopian princess/slave who stood by her man until they were sealed in a tomb and awaiting their last breath.

As the Egyptian princess Amneris, Stephanie Blythe, was a commanding presence who possessed such a powerful and beautiful voice that it felt as if she were singing just a few feet away. Particularly mesmerizing was how she could descend into the basement of her mezzo tessitura, because it retained so much resonance while gaining depth. Blythe wisely held back her volume a bit when singing with the other principals. With outstanding acting, she created the complex persona of a woman who held power over everything except the man she wanted most. The scene in which Amneris relaxed while considering which wreath to place on Radames’ head was one of the many highlights that Blythe, because she effortlessly floated her entrances on “Ah! Vieni, amor mio” (“Ah, come, my love”).

Antonello Palombi sang the role of Radames, the leader of the Egyptian forces and the lover of Aida, outstandingly. His opening aria “Celeste Aida” had passion to burn, and his voice throughout the opera was clear, present, and resilient. Palombi also had a natural presence on stage that shifted well between the warrior-type and the daring lover of a woman whose countrymen were his adversaries.
Charles Taylor created a vigorous Amonasro, King of Ethiopia, with a voice that could instantly change from warm and tender to fiery and flinty. Luiz-Ottavio Faria as Ramfis, the Egyptian high-priest, sang forcefully and with convincingly.

The chorus, coached by Beth Kirchhoff, added a lot to this production by adding volume in the big, celebratory scenes like the triumphal march, but also with a smooth, almost ghostly sound at the end of the opera during the entombment of Aida and Radames. The orchestra was paced well by guest conductor Riccaro Frizza, and there were many moments when their sound shimmered gloriously.

The scenery, from San Diego Opera, was exceptional for the way it evoked ancient Egypt and for its flexibility. Columns and massive beams that extended across the stage were covered with hieroglyphs, but they could be extended to depict a different scene. The first scene opened with Radames looking at a mocked up battlefield of cardboard soldiers who faced each other from opposing banks of the Nile. In the next scene this battlefield was tipped vertically so that each soldier became a gravestone. Kudos to lighting designer Robert Wierzel for getting that just right. Another highlight was his dramatic blue lighting for the evening scene when Aida secretly meets with Radames.

The colorful, traditional costumes, designed by Peter J. Hall for Dallas Opera, were also outstanding, giving the production even more texture. The King of Egypt, sung very well by Joseph Rawley, had a full headdress that couldn’t be tipped very far when he took his bows during the curtain call. The dancers in the ballet section had the most the least colorful garb, and their energetic movement would’ve had problems with any elaborate clothing. Choreographer Donald Byrd used symbolism expertly to depict the battle between the Egyptians and the Ethiopians. Stage director Robin Guarino kept the movement of the principals and chorus interesting and well-focused so that the story came across with clarity.

All in all, this is an outstanding “Aida” that you shouldn't miss.
Posted by James Bash at 12:53 PM