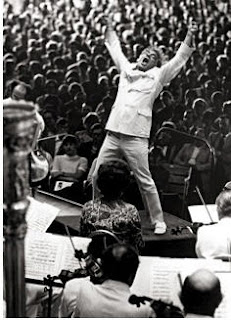 Alex Ross recently wrote a fine article about Leonard Bernstein, and it appeared in a recent issue of the New Yorker magazine. It's also available online here.

I really enjoyed reading how Bernstein could take some music he had written for one work and use it for another. Here's a quote from the article:

"One evening in October, Jack Gottlieb, who served as Bernstein’s assistant at the New York Philharmonic, presented a lecture-concert at the Jewish Museum in which he and various performers demonstrated Bernstein’s relationship with Jewish traditions. In the process, they highlighted the composer’s knack for alchemically transforming his own material. One part of the program focussed on “Chichester Psalms,” Bernstein’s choral masterpiece from 1965. Gottlieb noted that the music of the second movement—combining Psalm 23 (“The Lord is my shepherd, I shall not want”) with Psalm 2 (“Why do the nations rage”)—is largely derived from other projects. Just before writing the “Psalms,” Bernstein tried to write a musical based on Thornton Wilder’s “The Skin of Our Teeth.” When the project fell through, he saw that one completed number, the gently bluesy duet “Spring Will Come Again,” fit the words of the psalm: “Winds may blow” became “Adonai,” “Spring will come again” became “Naf’shi y’shovev.” Bernstein also retooled a castoff number from “West Side Story,” a fight song called “Mix,” to produce Psalm 2: “Make a mess of ’em / Make the sons of bitches pay” mutated into “Lamah rag’shu / Lamah ra-g’-shu goyim.” Bernstein’s propulsively muttering musical line applies equally to rival gangs and raging nations, which are, after all, symptoms of the same disease. The Amor Artis Choir and the soprano Heather Buck sang the pieces at the Jewish Museum, and it was like watching one of the great magic tricks in history explained."
Posted by James Bash at 6:10 PM