Symphony in Waves, Grant Park Orchestra, and Kalmar stimulate the imagination with new works by Kernis 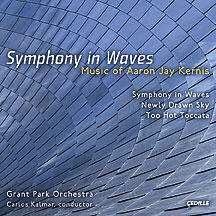 If you’re trapped in a windowless room and have the urge to watch the sky or the ocean, then your situation is not hopeless if you can listen to a new recording that features the music of Aaron Jay Kernis. Entitled “Symphony in Waves” this album contains superb performances by the Grant Park Orchestra under Carlos Kalmar that evoke the ephemeral nature of the air and water.

Released in August under the Cedille label, “Symphony in Waves” features three works by Kernis. First up is “Newly Drawn Sky,” the newest work (2005) in the recording. After it comes the nimble and off-kilter “Too Hot Toccata,” which Kernis wrote in 1996. The last and longest piece is the title work, “Symphony in Waves,” which dates back to 1989. Although an earlier version for chamber ensemble received an excellent recording in 2006 by the New York Chamber Symphony under the direction of Gerard Schwarz, this new release under the Cedille label is the first full orchestral recording.

“Newly Drawn Sky” uses a host of unusual orchestral sounds to seem to paint ephemeral events that take place outdoors over our heads. The piece begins with an ominous, dark rumble from the lowest instruments that seems to create the image of a menacing sun. It seems to burn off the morning mist and clear the atmosphere. Then the music gradually becomes dense and gains weight, suggesting slow moving clouds that mass in the distance. These clouds become aggressive and threatening. A hard rain falls, and it’s cleared away and overtaken by a rainbow, symbolized by chimes and cymbals in the orchestra. Many more events take place, but you get the idea. All in all, the shifting sounds of this piece convey a lot of drama and stimulate the imagination.

“Too Hot Toccata” is a lightening quick work that threatens to careen out of control. No orchestra member gets to linger over a note, because each one is very hot to the touch. The orchestra takes the accelerandos with élan, playing everything crisply. At one point, they get to rock out and create musical havoc. This piece sounds virtuosic and fun at the same time.

With five movements and 40 minutes, “Symphony in Waves” is the biggest work on the album, and Kernis unleashes a many different tonal combinations to deliver a constantly changing seascape. In the first movement, “Continuous Wave,” the fog horn-like sound signals a warning before the basses create a wave that comes out of the depths like terrifying Poseidon. The playful interaction of sounds between all parts of the orchestra in the second movement, “Scherzo,” ends with a quickie striptease. The third movement, “Still Movement” throws down the hammer with blocks of sound and shifts back and forth from very loud to very quiet before leaving us in a haunted, windy space. The fourth movement, “Intermezzo” evoked a flock of birds and waves that fold upon each other. The fifth movement, “Finale” ends with exuberance.

“Symphony in Waves” has many moments of contemplative stillness that are broken up by periods of restlessness and change from all directions. It’s a great work that stirs the imagination and gives much satisfaction for the direction of contemporary orchestral music. This exciting new recording of Kernis’s work by Kalmar and the Grant Park Orchestra has set a high mark. I hope that you get the chance to hear it.
Posted by James Bash at 7:28 AM