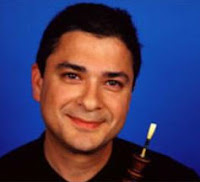 Acclaimed Baroque oboist Gonzalo X. Ruiz is featured with Monica Huggett in a new recording by the Ensemble Sonnerie of Bach’s Orchestral Suites For A Young Prince. This recording has just received a Grammy nomination in the category for Best Small Ensemble Performance.

Ruiz was in town last weekend to play with the Portland Baroque Orchestra, and I got to do a brief interview with him.

Congratulations on your Grammy nomination!

Ruiz: Thanks! This nomination feels really great! We do make a lot of recordings, and each time we feel that that each recording should get noticed. But this one, in particular, I had hoped would get noticed, because this had been my baby. It had been years in planning. It’s my version of the four Bach suites – what I think are the original versions – including a brand new reconstruction of the second suite. So, I really put myself out there, and it’s extremely gratifying that this recording was nominated.

So you did a lot of research for this music?

Ruiz: I had access to high-quality photo reproductions of all the original materials.

Is this the first Grammy that you’ve been nominated for?

Ruiz: Yes, I’ve been on orchestra recordings that have been nominated for Grammys, but this one is more personal, and I’m much more involved with my name on the front cover and all that.

When did you do the recording?

Ruiz: About a year ago. It typically takes about six months to get a CD to market after you recorded the music. It got some nice reviews after it came out, and then I got the email that it’s on the Grammy list.

Are you still based in Boston, because I thought that you now teach with Monica Huggett at Juilliard in New York City?

Ruiz: Yes, I’m still in Boston, but I’ll probably move to New York this summer. That’s the current plan. My wife and don’t want to make the move now because we have two elementary school kids.

Congratulations again on the nomination and best of luck to you.

For a detailed description of Ruiz’s contribution to the Bach recording, go to the ArchivMusic website. Also, this music will be performed in Portland Baroque Orchestra concert series featuring Ruiz and Huggett on May 14-16.
Posted by James Bash at 12:04 AM