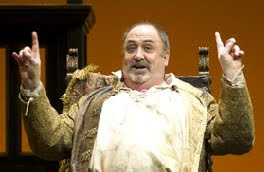 Seattle Opera’s production of “Falstaff” is a real winner, blending comedy with Verdi’s great music to create laughter over our human predicament. The opening night performance (February 27) at McCaw Hall was a feast for the ears, with Peter Rose in the title role and an outstanding cast to support him.

From the instant he sauntered onto the stage, rocked slightly back on his chair, and chomped into a super-duper-sized drum stick, Rose embodied Shakespeare’s fat knight who has fallen on hard times and foolishly thinks that he has the swagger to seduce two young women and get his hands on their money. Rose knew how to make the most of his physical heft and got volumes of laughter from the audience with an array of facial expressions.

Rose’s bass-baritone masterfully combined agility and expressivity. It easily thundered above the orchestra whenever it swelled to a huge crescendo, but it also seamlessly slipped into a light, fluffy falsetto when Falstaff was mocking a woman’s voice. Rose could give his voice a rough, threatening edge whenever he wanted, but it was always gorgeously round in the center, no-matter what.

Svetla Vasseleva dazzled as Alice Ford with soprano that glowed. Anya Matanovic’s Nannetta played coquetry to the hilt and sang with ardor. As Dame Quickly, Stephanie Blythe was in her element, especially in the scenes in which she lured Falstaff into thinking that he had one last chance to woo Alice in the Windsor Forest at midnight. Delightful also was the interplay between Rose and the Sasha Cooke, who created the role of Meg Page.

As Ford, Weston Hurt created the epitome of the jealous husband, hurling accusations across the stage. The object of his venom was Fenton, played by Blagoj Nacoski, who showed off an refined tenor voice. As Falstaff’s inept sidekicks, Bardolph and Pistol, Steven Goldstein and Ashraf Sewailam added to the fun, as did Doug Jones in the role of Dr. Caius. All three men vaulted and tumbled over scenery with the grace of Olympic athletes.

Under the baton of Riccardo Frizza, the orchestra sounded robust but often was too loud for Goldstein, Sewailam, and Jones. The strings slipped on a few notes in the final act, but overall, the musicians played extremely well, transporting the audience into Falstaff’s world.

The scenery, created by Seattle Opera seemed too understated. A boardwalk atop rows of sawhorses allowed the characters to enter the stage area. They could also sit in chairs either to the left or the right side of the stage. The last scene in Windsor Forest used a tall ladder to depict the large oak tree and a cluster of chairs (suspended above the tree) represented its foliage. The costumes (from Cleveland Opera) were traditional, and were stripped off (though not completely) in the finale when everyone joins Falstaff to sing of how all the world is folly and everyone can be the subject of a joke.

---
This review is cross-posted in Oregon Music News.
Posted by James Bash at 1:50 PM