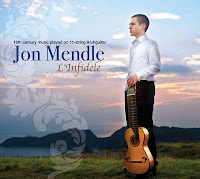 Archguitarist Jon Mendle recently released his first CD, entitled L'Infidele after a lute sonata of the same name by the master baroque lutenist Sylvius Leopold Weiss (1687-1750). This release, from Brooklyn's In A Circle Records and produced by the great Sergio Assad, showcases Mendle's incredible artistry and deep musicianship through the interesting dichotomy of playing ancient music on an instrument invented only in 1980, by guitarist/lutenist Peter Blanchette.

The archguitar is an eleven-stringed instrument that looks rather like a mutant classical guitar. According to Mendle's website, "the Archguitar is a hybrid of the Renaissance and Baroque lutes, 19th century guitar, and modern guitar, making it ideal for a large cross section of early music, as well as certain modern and impressionist works."

On to the CD however; it contains Mendle's own transcriptions of the Weiss lute sonata as well as one by Adam Falckenhagen (1697-1761) and CPE Bach's Prussian Sonata V which was originally written for clavier.

The CD opens with the deep and weighty Largo at the head of the Falckenhagen sonata. In the subsequent Allegro un Poco Mendle's technique is revealed in the fantastic roulades and turns that he throws out in a manner sounding seamless and almost effortless, which is as it should be, the ornamentation feeling like a perfectly natural and unobtrusive outgrowth of the musical stuff whence it came. The finale contains a mischievous recurring staccato theme that Mendle draws out insightfully and plays with obvious delight.

The CPE Bach is redolent with nascent classicism, and Mendle's playing makes the distinction between this style and the High Baroque of Weiss and Falckenhagen very clear. Again the fantastically difficult ornaments, this time in the middle Andante, are all realized smoothly and yet not monochromatically, alternately bold and delicate as called for. Throughout this CD the spectacular ornamentation is one commonality linking all of the compositions together; Mendle has a natural feel for it and isn't afraid to express himself through everything from filigreed and almost non-existent mordants to lengthy and substantive turns and doppelt-cadences. The Allegro Assai of this piece features voice-leadings taking off on various flights of fancy all their own.

The L'Infidele sonata, really a baroque dance suite, finishes out the CD. The Entree was exquisite, the Courante danceable and pulsing, and the Menuet featured terraced dynamics that yielded a fetching echo effect. Mendle explores a wide variety of tone colors in this suite; saucy mezzo-staccato phrases give way to sere, almost harsh plucking and muted, other-worldly legatos. The grumbling drone strings in the Musette present yet another delight to be savored.

If there were any flaw with this CD, it would only be that I wanted more after listening to it, and I immediately played it over from the beginning. Look for more great things to come from this brilliant emerging artist, who has already played with the likes of Yo Yo Ma and his teacher Sergio Assad.
Posted by Lorin Wilkerson at 10:21 AM