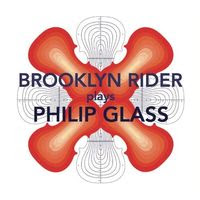 The innovative and exciting NYC string quartet Brooklyn Rider has a new CD from In a Circle Records in which the group records Philip Glass's entire string quartet oeuvre, which is the 5 numbered quartets plus the world premier recording of the Suite from "Bent" for String Quartet.

Brooklyn Rider, whose CD Dominant Curve was included in the Washington Post's list of top ten classical albums from 2010, was the right choice to premiere this important work. Bent, winner of the 1997 Cannes 'International Critics Award' tells the story of doomed relationships between gay men in Nazi Germany. The first of its 8 movements opens with a plaintive cello melody wending its way through a forest of suppurating strings, and one can feel the danger, the flight, the violence of the film. There are rays of hope in this work, however slim they may be. Brooklyn Rider understands how to perform this music from an intuitive, gut-level standpoint; one misplaced accent, one slightly shifted emphasis and the meaning of the whole structure is lost; the repetitive nature of Glass's motives both vertically and horizontally amplifies the importance of each little change, and without attention to every minute detail both technically and emotionally there will be nothing left. From the terrifying cello chords exploding from the smooth texture in the fourth movement to the forlorn wailing of the solo viola which is the only instrument heard in the final movement, the power of the composition shines through.

Some of the other quartets also come from film scores, including #3 which came from the 1983 film Mishima about the life of the quixotic Japanese author who committed seppuku in the early 70s. Very different in character from the Bent, there is less of the ceaseless in and out arpeggiation and more homophonic movement and stark chordal textures. String Quartet #1 was composed in 1966 but not first recorded until more than 20 years later. It is more experimental: its atonal warbling that at times veers toward a pizzicato almost completely lacking in pitch requires very different techniques of the group, and they render the ceaseless pulse with painful exactitude.

There is wondrous variety to be found in this release, each quartet with its own unique character, and Brooklyn Rider has the relentless energy required to sustain interest in the somber, often haunting sound world through which Glass's compositions wander. This release represents another big win from an unconventional and visionary group, and is an important contribution to both string quartet and Philip Glass discography.
Posted by Lorin Wilkerson at 6:35 AM