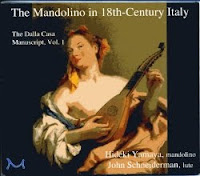 The mandolino in this recording is very different from the modern mandolin; it is small and downright dainty, strung with nylon strings and plucked with fingers instead of a plectrum. The instrument has a delicate tone--the upper registers can be tinny and affect the pitch, which is off-putting at first but actually grows endearing as the music plays on, and the unique timbre becomes a joy to hear.

A peppery, virtuosic little sonata by Antonio Tinazzoli (1650-1730) opens the CD, barrelling forward in one whirlwind movement, showcasing the range of the instrument. The rest of the CD is very much in the galante style, with sonatas/concertos by Giuseppe Vaccari and Ludovico Fontanelli (1682-1748). Yamaya’s accurate and judicious ornamentation can’t be easy to effect on this feathery instrument. The compositions themselves are delightful, warm and fetching; Yamaya’s enthusiasm for playing these gems is obvious and infectious. His own variations on the menuet themes by an anonymous composer are virtuosic, and in one of these variations the mandolin switches to accompaniment and the lute takes the solo; other than that the lute is continuo throughout. The final Giga of the closing Vaccari concerto is particularly enjoyable, featuring surprising, modern-feeling syncopations.

This release is authentic and satisfying; samples of the work can be found here.
Posted by Lorin Wilkerson at 2:32 PM

good review - we just picked it up for distribution at http://www.northpacificmusic.com/ and beyond - Hideki is well studied, solidly technical and artistically interpretive - a real musical asset in the region

Agreed; I always look forward to his concerts and CDs.