Denna Good-Mojab singing up a storm 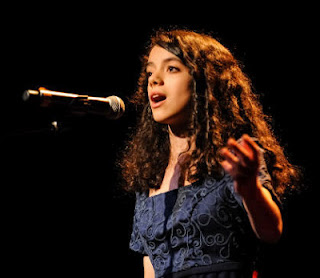 Fifteen-year-old Denna Good-Mojab recently sang an excerpt from the aria, "Una voce poco fa," from Rossini's opera, "The Barber of Seville," at two concerts as part of her participation in the 2012 More Music @ The Moore training and performance program for select young artists in the Seattle area. The video clip of her performance is now up on Youtube (http://www.youtube.com/DennaGoodMojab) as well as on her professional Facebook page (http://www.facebook.com/DennaGoodMojab) which provides news on her musical endeavors. Ms. Good-Mojab is a student of vocal performance at the University of Washington School of Music. She's finishing up her sophomore year in the music program, but has just become a senior by quarter hours at the University itself. She debuted with the Portland Opera at the age of 10 singing the role of the Second Spirit in the Opera’s 2007 production of Mozart’s “The Magic Flute.” She has performed with the Portland Opera several times since. She is currently in rehearsal with the Seattle Opera’s Youth Chorus for the Opera's August production of Turandot.
Posted by James Bash at 11:37 PM

Great performance! Denna used to go to the same school as me. Village Home students have had some exciting success these last few years!

I also go to Village. Happy for Denna, although a bit jealous.