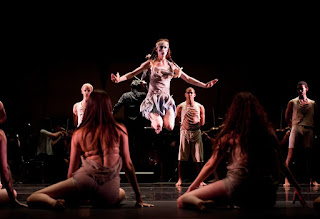 There’s nothing quite like a virgin sacrifice to attract a capacity audience to the concert hall. That’s what happened when the PSU Symphony teamed up with the Agnieszka Laska Dancers to produce an eye-catching, enthusiastic, and evocative performance of Igor Stravinsky “Le Sacre Du Printemps” (“The Rite of Spring”) on Friday (June 8). The production captivated a standing-room-only audience at Lincoln Performance Hall, most of whom, like this reviewer, had probably never before seen a live ballet performance of Stravinsky’s iconic work. They were rewarded with an electrifying production that worked exceedingly well to interpret the music and the story.


With Ken Selden conducting the orchestra, which was placed in the back part of the stage, the dance ensemble had a generous area at the front in which to explore the sonic textures and interpret an imagined pagan ritual. Choreographer Agnieszka Laska created a highly imaginative series of movements for the dance ensemble of nine women and four men. Some of the movement by the women was sexy and at other times very playful. They often seemed to be testing each other in order to figure out who might become the chosen one – that is, the one who is selected to dance herself to death and save the community. At one point, when the music became more adversarial, the men entered into the picture, and they also tested the mettle of the women. One of the most memorable situations occurred with the women sitting in a diagonal line across the floor and the men leaping over them. This seemed to suggest the jumping of the broom fertility ritual that extends back to ancient times in a number of cultures.
Terrific dancing by Lauren Michelle Richmond as The Chosen One helped give this “Rite” a lasting impression, and the ending, with the shower of rain and the giggling young girls, was a refreshing take on the story. Aside from a some intonation issues, the orchestra excelled under Selden’s direction, capturing the spirit of the music with verve and intensity.
In the first half of the concert, the PSU Percussion Ensemble played John Cage’s “Third Construction.” I lost count on all of the percussion instruments that were played by the four musicians, but it was simply amazing to hear all of the different sounds that they produced and the variety of rhythms they used.  Overall, the piece had a randomness and quasi-anarchic feeling that was very appealing.
This was followed by the H. K. Gruber’s “Manhattan Broadcasts,” which was played by the PSU New Music Ensemble under the baton of Ken Selden.  The first movement of this piece was entitled “Tammany Hall,” When I think of Tammany Hall, I think of Boss Tweed and the 1890s, but with his jazz-based inflections, Gruber seemed to be hinting at Tammany Hall of the Roaring Twenties. The second movement, entitled “Radio City” had a big band, swinging night clubby sound that was delightful. It was also sprinkled with solos and flutist Jayde Weide delivered one of the best.
---
The ALD ensemble will present "The Rite of Spring" on June 29 as part of the Astoria Music Festival. This performance will be done with members of the Maddox Dance Studio Little Ballet Theatre (Jeanne Maddox Peterson, Director) and accompaniment provided by Jeffrey Payne and Susan Smith in Stravinsky's original version for Piano 4-Hands. Readers should take note that the Astoria Music Festival has a special 2 for 1 offer going on right now.
Posted by James Bash at 11:14 PM

wonderful review of a wonderful evening! thanx so much for continuing to support pdx arts with such unflagging energy & enthusiasm.

good work! - this may prove useful in our continuing efforts to sell this show to presenters around the state - keen observation of the broom ritual - exactly Agnieszka's reference and a riveting effect, especially in the tight timing between the boys jumping over the girls in line on the floor, raising and lowering their heads, all tightly cued to the music - thrilling moment - thanks for your good work

Plus our cute extras: Natalie Cheechov and Sophie Marcus.