It’s rare when the weather wreaks total havoc in Portland, but that’s what happened last week when a number of concerts were cancelled because of a combination of snow and ice build-up all over the metro area. But the dicey conditions didn’t stop the show at Portland Opera, which went ahead with its final two performances of Donizetti’s “Lucia di Lammermoor.” I didn’t get to see how things went on Thursday evening when snow had caused massive traffic jams all over the city, but I did get experience the production on Saturday (February 8th) after two days of snow had encrusted the streets and nobody was driving nowhere. Fortunately, one of my neighbors used to be a ranger at Yosemite and has an all-wheel drive Subaru. He carefully drove downtown with ease and parked in a lot near Keller Auditorium where I usually park. No attendant was stationed in the cold (it was around 25° F) to collect the parking fee; so we joined the handful of other vehicles and gingerly walked over to the Keller.

Though sparse, the atmosphere in the lobby of the Keller was decided buoyant, with people dressed mostly in business casual plus sturdy footwear. One Portland Opera staffer was managing the ticket booth all by herself until the company’s general director, Christopher Mattliano, and the director of production, Laura Hassell, came to the rescue.

As I found my seat on the main floor, I took note of the low attendance and then noticed one thing that was strikingly absent: there was no sound from the musicians in the orchestra pit warming up. That made me get up and walk down to take a look. Ah! There was no on in the orchestra pit, except for one man sitting at a grand piano and looking over a score. That’s when I took this photo of the audience. 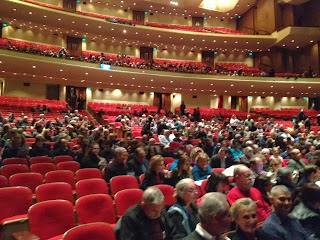 Within the next few minutes, Mattaliano came to the front of the curtain and explained that since the members of the orchestra come from all around the Portland metro area, they were unable to get to the auditorium because of the inclement weather. He invited everyone in attendance to come forward and fill the front area as much as possible. The principals were ready to go and they would be flying out of Portland to their next gig the next day… weather permitting. He also said that chocolates would be handed out gratis in the lobby during intermission.

After the reassembling ourselves closer to the stage, the lights went down, conductor George Manahan appeared in the opera pit and took a bow, and the production was underway with chorus master Nicholas Fox at the keyboard. For anyone who has read this far but doesn’t know the story of “Lucia di Lammermoor,” here’s a brief synopsis. Lucia is a noblewoman whose brother, Enrico, wants her to marry a wealthy man, Arturo, who she does not love. She loves, instead, Edgardo, the rival of Enrico. But some years beforehand, Enrico killed Edgardo’s father and usurped his family’s land to boot. Using a forged letter, Enrico convinces Lucia that Edgardo is unfaithful. So she reluctantly signs the wedding contract, but on her wedding night, she goes mad, murders Arturo, and then dies. Crushed by the news of Lucia’s death, Edgardo takes his own life. The action takes place in 17th Century Scotland and was inspired by Sir Walter Scott’s “The Bride of Lammermoor,” which was loosely based on a real tragedy between two families in Scotland.
Elizabeth Futral, making her debut with Portland Opera, created a passionate Lucia, but Futral’s vibrato was often on the wild side. Still, her mad scene, augmented by Fox’s light touch on the piano that deftly imitated the flute part, was a highlight of the evening. Scott Ramsay, also in his debut with the company, sang the part of Edgardo with an almost lyric tenor quality, which worked best in the scenes with Lucia, but it need to be more gripping in the final scene. Weston Hurt, as Enrico, was the embodiment of wickedness and pride. Peter Volpe, was ramrod straight and haughty as the chaplain and tutor Bidebent. Ian José Ramierez sang ardently as Arturo, and Carl Halvorson commanded the stage as the captain of the guard, Normanno. Melissa Fajardo provided understanding compassion as Alisa, Lucia’s companion.

The chorus, which seemed to be missing a fair number of women, more than held its own, and Manahan kept the enterprise afloat with spot-on gestures and a wonderful pace that worked well on all sides. But the real hero of the day was Fox, who, with his agile and evocative playing, represented an entire orchestra. I went down to the orchestra pit during intermission and saw him looking over the score with the utmost concentration. I’m not sure that he had much warning that he would be the accompanist that evening. In any case, he really saved the day.
Directions by Doug Scholz-Carlson were crisp, but, in general, the men seemed stilted against Futral’s natural and fluid portrayal of Lucia. The scenery, constructed by Minnesota Opera in a production created by James Robinson with sets designed by Christine Jones, worked very effectively with the story, especially the large partitions with the vertical grain that suggested a remote and rugged landscape. The slanted tables that were used in the wedding scene enhanced the off-balanced mood of the story. The one humorous moment came when (fake) snow fell at the beginning of the scene when Lucia visited the grave of her mother. That caused the audience to chuckle.

Another high point of this production was the wonderful use of lighting, designed by Scott Zielinski and recreated by Scott Bolman, from the front of the stage. It projected ominous shadows of the principals on the huge walls in the background.

Everyone in the production seemed to be giving 150 percent, and that made this “Lucia” a rewarding experience. Before the start of the second act, Mattaliano announced that Tri-Met had stopped the Max lines. So it was no wonder that as the cast came out for its bows, the chorus didn’t appear. They had already gone home.

Here's a photo of opera patrons at the chocolate table. 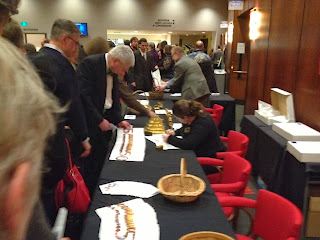 James, we were at Thursday's performance - surprisingly with full Orchestra (but without the intermission chocolates...). We were able to park less than a block away...
-ron & minnie

Ron, You're from Eastern Montana! A little bit of snow won't stop you.